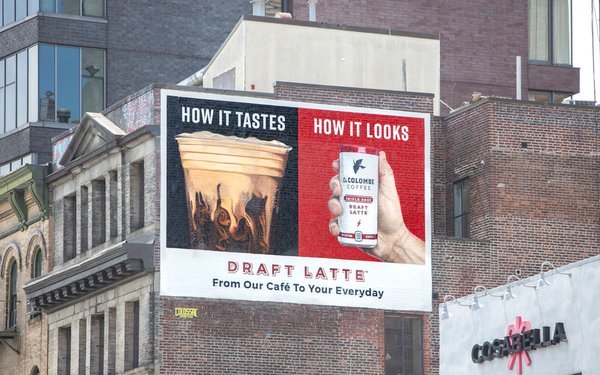 The cold-coffee category continues to heat up with the launch of La Colombe Coffee Roasters’ first-ever advertising campaign, and an investment by singer Shakira in High Brew Coffee.

Accordingly, campaign billboards visualize both a cup of café-prepared, cold-brew coffee and the canned version of Draft Latte above the tagline “From Our Café To Your Everyday.”

The goal of the campaign is “to expose the simple ingredients of a Draft Latte in a delicious and approachable way,” says Kathryn O'Connor, senior vice president of marketing. "It's smooth cold brew coffee mixed with creamy foamed milk, the drink most often enjoyed in our cafes everyday.”

There are no plans for Shakira to appear in advertising for High Brew Coffee, according to a spokeswoman for the company. The singer joins the company’s family of celebrity investors under the aegis of “For Those Who Do.” The group includes singer Halsey, former MLB pitcher Huston Street, pop rock group Kings of Leon, former professional cyclist Lance Armstrong and chef Tim Love.

"While most people know Shakira as the superstar singer she is, we were immediately drawn to the success she has found in her many other business ventures," says David Smith, High Brew Coffee founder. The singer has branched out from her entertainment base with various business initiatives, including a global partnership with Fisher-Price and her own line of beauty products.

Founded in 2014, High Brew Coffee recently launched three Sparkling Cold Brew Flavors in Classic Black, Vintage Vanilla and Midnight Mocha, as well as Milk Chocolate + Protein, with 3 grams of fiber and 12 grams of protein. Additionally, the brand has a new line of 12-ounce Triple Shot espresso products with three times the caffeine of a regular cup of coffee.