What Would You Get If You Merged T-Mobile With Taco Bell? T-Mobell, Of Course 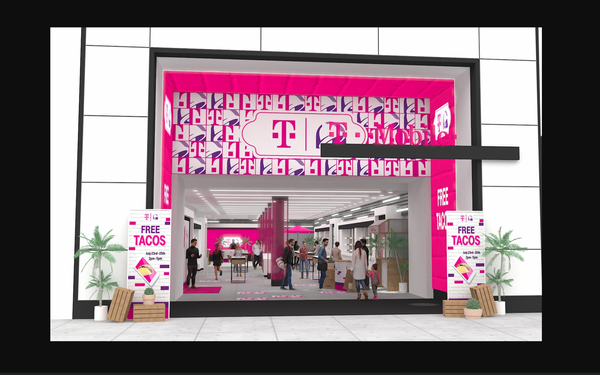 T-Mobile is always good for a quirky promotion, and the newest one is the mash-up that combines three Taco Bell outlets with T-Mobile’s Signature Stores in New York, Los Angeles and Chicago.

Those places will be called T-MoBell stores.

Visitors will get free tacos, a free serving of the limited edition T-MoBell Freeze beverage and free swag that includes taco-themed socks or a taco-shaped foam hat at those locations (while supplies last!) from July 23-25.

T-Mobile is also promising celebrity drop-ins — but the only one it’s mentioned so far is Cotton Underwood from “The Bachelor,” who will meet and greet at  the Chicago store.

“People love tacos. And they love their phones. T-MoBell is the ultimate fusion of those two loves, and we can’t wait to show everyone what we’ve cooked up,” said John Legere, T-Mobile’s CEO.

The wireless company  started its free Taco Tuesday giveaway right after the 2019 Super Bowl. It claims it has given away 14 million free Taco Bell tacos since then.

The promotion fits with T-Mobile’s Un-Carrier branding image that in more substantial ways changed the wireless business. For example, it popularized some unlimited data plans that the industry soon copied

Of course, T-Mobile’s trademark color is a bright, bold fuchsia that fairly screams, “Look at me!” (Legere’s uniform is  a fuchsia-highlighted black jumpsuit and tennis shoes that sort of screams the same thing.)

And as Verizon and AT&T duke it out for wireless supremacy — usually without mentioning each other’s name — T-Mobile, with a third-place 81 million, loves to tweak the giants. Legere, for example, has dubbed the two competitors “dumb and dumber.”

Right now, T-Mobile still awaits approval of its merger with Sprint. The two claim that merged, they would have the  size to create more competition for Verizon and AT&T. And if mashing up T-Mobile and Taco Bell gives you T-Mobell, then perhaps T-Mobile  and Sprint would be T-Sprintle -- Mobile Sprinter?