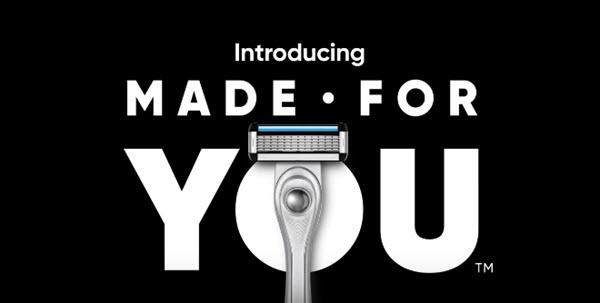 Back in 2012, Bic got the kind of attention no brand wants.

Its launch of a Bic Crystal pen designed “for her” generated widespread ridicule — including a popular satiric video by Ellen DeGeneris. (“They’re just like regular pens, except they’re pink, so they cost twice as much…”)

But Bic wasn’t by any means alone in stumbling on the gender front while trying to deliver products that feel relevant and “tailored” to consumers.

In fact, about the same time, rival Procter & Gamble brand Gillette took similar heat for a Venus Spa Breeze razor. After describing the product as “colored a dainty lilac and apparently ‘infused with a white tea scent,’” The Independent’s Nat Guest declared: “Hey, Gillette? Screw you. If I want a cup of tea, I’ll have a cup of tea.”

In Japan, Honda and Fujitsu went even further off the tracks, trying to market misguidedly “for her” car and laptop models, respectively.

Today, you really can’t be a competent consumer marketer without knowing not only how to avoid charges of sexism, but how to be respectful of a wide range of gender identities. And that involves a lot more than just being aware of gender-neutral pronouns — particularly if a product’s potential audience spans age cohorts.

Awareness of gender diversity has come a long way in the past few years, thanks in large part to the greater openness and acceptance of younger consumers. (Thirty-five percent of Gen Z respondents to a late 2018 Pew Research Center survey said that they know someone who uses gender-neutral pronouns, versus 25% of millennials, 16% of Gen Xers and 12% of baby boomers saying the same.)

While acceptance among older generations is still far from a given — witness the ongoing battles over transgender participation in the military and athletics, not to mention the restroom wars — the wave of Gen Z’s marching into adulthood is already influencing consumerism, as well as public policies.

All of that context is by way of a lead-up to a look at an interesting product launch from Bic USA: a gender-neutral, Amazon-exclusive refillable razor system called “Made For YOU by Bic” (“MFY” for shorthand purposes here).

MFY, which debuted on Amazon on June 25, is normally priced at $8.99 for the starter kit that includes the handle and two razor cartridges (though I saw it just now on sale for $7.99 on Amazon). The handle and eight or 12 refills go for about $16.99 and $23.99, respectively. Standalone refill packs of four are listing around $9.99.

These prices appear to be in line with or a bit lower than those of other direct-to-consumer refillable razor brands.

MFY is meant for both faces and bodies. It has five flexible blades, an edging blade, a lubrication strip, and an ergonomic, pivoting metal handle, and comes in four “modern” colors: nickel, teal, navy and white.

The razor is being marketed as “one brand for both men and women, designed to shave everybody and every body, no matter who you are or what you shave.”

The launch “taps into the evolving consumer mindset that calls for more inclusive choices in the personal care industry,” says Bic, citing 2018 Mintel research showing that 67% of adults ages 18 to 24 “are interested in using genderless personal care products.”

“The current market includes clear lines around which razors and which scents and which colors and which handles are appropriate for whom, and that’s not what everyone is looking for,” Mary Fox, general manager of Bic North America, tells CPG FYI. “There’s a new market for a segment of consumers who are stepping away from traditional gender stereotypes and prefer a gender-neutral product.

“With shave clubs and other grooming brands, we know consumers have choices,” she continues. “But the Made For YOU razor system combines everything this consumer is looking for: exceptional performance, terrific value, an inclusive platform and the most seamless shopping experience, thanks to our relationship with Amazon.”

The more specific dynamics behind why so many young adults say that they’re interested in using gender-neutral personal products aren’t clear. Is it simply because they approve of products or brands that recognize gender diversity? Or products that aren’t being marketed as gender-specific based on largely or completely trumped-up “differences” between the sexes? Or products that are being sold at the same price to women and men, instead of being arbitrarily priced higher for women, as so many personal care and cosmetics are? All of the above? Other?

The launch’s marketing campaign doesn’t provide any obvious answers to those kinds of questions. It includes an energetic video (below), from lead creative agency ArtHouse, featuring a diverse group of young adults and a few older consumers shaving various parts of their bodies. The ad stresses the gender-neutral and “every body” messages, adding: “Damn good shave. Damn good price.” And it makes the “Bic + Amazon” connection clear.

Bic describes the Amazon-exclusive MFY venture as “taking on the shave clubs” that have been disrupting the shaving category for years now. (Bic launched its own DTC shave club in France and the U.K. in 2017, but not yet in the United States.) It also says that the venture is part of its “Invent the Future” initiative — meaning its plan to become a “more consumer-centric, omnichannel company.”

The launch’s media plan, from Merkley + Partners, includes “a mix of media both on and off Amazon properties,” says Fox. “We’re tracking media performance daily and make continual optimizations to the plan to drive the best results.”

While it’s early days, “we’re excited about the sales momentum so far — particularly after being included in the Prime Flash Deals" in recent days, she reports.

Has Bic found a way to eat its proverbial marketing cake and have it, too?

The company will, of course, continue to sell its more traditional, gender-specific refillable and disposable razor lines anywhere it chooses, including brick-and-mortar retailers, Amazon or other online channels.

Meanwhile, MFY — which, as an exclusive rather than a private-label offering, does include the Bic brand’s name — may help Bic achieve a progressive, even hip image among millions of young adults who buy on Amazon. That’s, of course, in addition to what both parties assume will be ongoing transactional relationships with sizable numbers of these consumers. (Some of whom will, as with other products, no doubt opt to buy the razors through Amazon’s Subscribe & Save program, and/or get free express delivery of them through their Prime memberships.)

Fox declines to discuss the terms of the MFY deal, other than to say that the line will continue to be sold exclusively on Amazon, with Bic as the sole manufacturer, for “at least the next 30 years.”

But she confirms that MFY is part of Amazon’s Accelerator program, which is enabling Bic to sell the innovative new brand to Amazon’s “built-in mass audience.” Consumers’ ability to “get everything they need in one place” is, of course, why some 75% of U.S. households shop the site, she notes.

“With more shave clubs and boutique razor brands on the market, we know that consumers have options when it comes to shaving, but they often need to go to individual DTC sites for shave products and to other sites for the rest of their shopping needs,” she adds. “And sometimes, they’re sacrificing quality for price, or vice-versa. Made For YOU delivers a great shave for everybody – and every body – at a great price. And with its exclusive availability on Amazon, it has the convenience of a DTC razor for our consumer.”

Obviously, Bic believes that the benefits of the Accelerator program — including access to those convenience-oriented young adults and Amazon’s fulfillment and fast delivery capabilities — outweigh any downsides, at least in this case.

According to AMZ Advisers’ blog, the perks of being in the Accelerator program include immediate access to metrics tools (basic analytics only, no access to coveted customer data insights); a testing ground for new products to get quick customer feedback; free premium product page content and homepage placement on sale days, plus additional placements for products with high ratings and reviews; social media and email marketing executed by Amazon merchandising; a certain number of free Amazon Vine reviews (normally $2,500 per product for Amazon vendors); Amazon Web Services credits for brand websites; access to a Thinkspace co-working office in Seattle; and participation with other brands in special projects like co-branded pop-up retail stores.

The program is also structured so that Amazon takes control of the supply chain and the pricing, enabling Amazon to realize better profit margins (meaning, obviously, lower margins for the manufacturer) while keeping its competitive edge, points out this consultancy geared to helping brands work successfully with the retail behemoth.

Typically, Accelerator brands “become the property of Amazon, along with any new products under that brand that Amazon wants,” say these pros. “This means no opportunity for growth outside of the marketplace or any chance for a brand to develop its own customer base. The brand will never have the chance to develop relationships with distributors or retailers. Moreover, Amazon can always take on a brand selling competing products.”

Has Bic somehow managed to carve out some exceptions or more favorable terms than the typical Accelerator deal? Assuming that such an arrangement could be made within legal strictures, only those closely involved would know.

What is clear is that one reason that Amazon is now favoring branded exclusives over focusing on expanding its already extensive private-label portfolio is that it can rely on the brands’ expertise in product R&D and manufacturing.

Let’s hope we get some indicators in the months ahead of how well this Bic/Amazon deal is playing out for the partners.

Short of public statements on its success, or leaks about sales performance, we can always watch for more gender-neutral launches from other CPGs in shaving or other product categories, or more product launches from Bic and Amazon.

My own guess is that both of those developments will be forthcoming in the not-distant future.