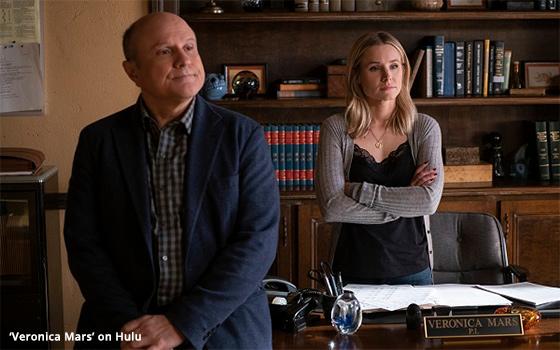 Everybody's doing it, right? Spouting dirty words right and left, and engaging in the kinds of cinematic sex play that was once relegated to Cinemax in the middle of the night.

Today, however, we live in a taboo-shattering age, in which regular mass-appeal TV has caught up with the old Cinemax -- and what is permissible on non-commercial subscription television is slowly but surely getting mainstreamed in the ad-supported sphere.

In recent years, basic cable has been at the forefront of this taboo-busting by, among other things, chipping away at George Carlin’s “Seven Words You Can Never Say On Television.” At last count, three of them are still forbidden on commercially supported TV, and a fourth is still prohibited on some networks, but not on all of them.

Enter “Veronica Mars,” which is making a reappearance as a TV series 12 years after it had its third and (supposedly) final season on the CW in 2007 (a one-off “Veronica Mars” feature film released in 2014 doesn't count).

In the 12 years since we last saw this former teen sleuth (played by Kristen Bell, now 39), much has changed in the world of TV -- most notably the proliferation of dirty words and a new category of platforms on which to utter them.

The new “Veronica Mars” is on Hulu, not the CW (or any other network). And the show’s producers and writers evidently intended their rebooted show to reflect the new permissiveness in sex and language that is all the rage on TV today. The show contains at least three of Carlin’s “Seven Words” plus at least two he didn't include in that famous routine from the 1970s.

The problem is, the potty talk adds nothing to the show. It is entirely unnecessary, distracting and off-putting. Even more cringeworthy is the sexually charged reunion of Veronica and long-time love Logan Echolls (played once again by Jason Dohring, now 37). The two have been sweethearts since they were in high school.

Here, they come across as immature and long in the tooth, especially Veronica, who acts like a rebellious teen when Logan proposes marriage and she refuses him.

In this new “season” of “Veronica Mars” (Hulu is billing these eight new episodes as Season Four), Logan is some kind of swashbuckling, globetrotting Navy SEAL or some other sort of special ops guy, and Veronica doesn’t seem to mind when he is gone from their California home for months at a time.

Their steamy reunion is a ridiculous montage of close-up writhing and back-arching for which no one should be proud -- neither the two actors nor the director assigned to choreograph it.

Much of the show displays a slapdash, let's-get-it-over-with quality. Even the storyline contains elements we’ve seen a hundred times. In the show, Veronica is a grown-up sleuth working with her father (played again by Enrico Colantoni -- pictured above with Bell).

The new season of “Veronica Mars” concerns itself with a serial bomber and a Mexican crime cartel. These Spanish-speaking Mafiosi from south of the border have apparently replaced the Italian-American mafia as pop culture’s go-to crime organizations.

It's spring break in Neptune and someone delivers a bomb in a pizza box to one of the town's busiest motels. Four people are killed in the resultant explosion, including the fiancée of the son of a U.S. congressman.

In the real world, a bombing in a small town in which four people are killed would make national news, and more importantly, would impact every resident of the town emotionally for weeks. But not in “Veronica Mars.”

Here, the lead actors behave as if fatal bombings happen every day in their town. Basically, they do not really react at all. It is as if the director could not have been bothered to remind them that they are long-time members of this community in which a motel that has been in their midst for years is suddenly destroyed by a homicidal bomber. You’re actors, he might have told them. Try and act sad.

This new “Veronica Mars” emerges as one of the worst shows this year. Only long-time fans (known as “marshmallows” from the root word “Mars”) will stay with it after sampling it. Almost everyone else will go elsewhere.

For weeks (if not months), Hulu was scheduled to unveil these eight new episodes this coming Friday, July 26. But last Friday, Hulu suddenly posted the whole thing a week early.

So now, we can chalk up yet another change in the pantheon of TV traditions: Premiere schedules are now flexible, if not entirely meaningless.