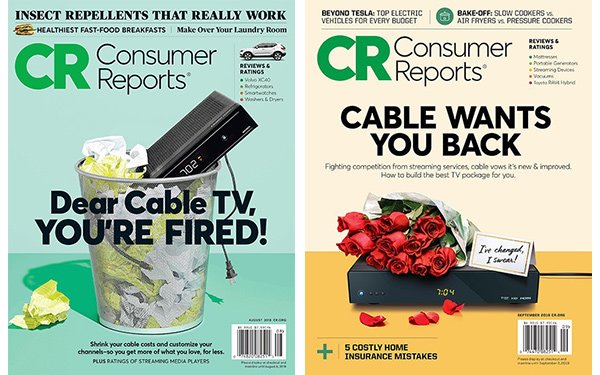 Consumer Reports’ annual take on the value of cable television is less harsh this year than it was a year ago.

This year in its September issue, the magazine is giving the cable TV industry at least a little credit for making some changes in the products it offers in response to the competition the industry faces from subscription streaming services.

In addition, CR notes that subscription fees for streaming services have crept up in the past year, making them less of a bargain vs. cable than they used to be.

A year ago in August 2018, CR’s cover headline was a pointed “Dear Cable TV, YOU’RE FIRED!” with a provocative photo of a cable box in a trash can (image above left).

The package of stories inside amounted to a virtual instruction manual for cord-cutting. The stories explained how and why consumers could benefit by dropping cable in favor of one or more streaming services, and/or purchasing a new over-the-air antenna to receive today’s high-def broadcast signals for free.

This year's cover takes an entirely different approach with an image of a bouquet of roses draped over a cable box with a gift card that reads “I’ve changed, I swear!” This year’s cover headline is: “CABLE WANTS YOU BACK” (above right).

While the package of stories inside does not exactly add up to a ringing endorsement of cable, the magazine does point out that the industry has made some innovations since last year's cable cover story.

In one section of this year's cable TV package, CR positions cable head-to-head against the streaming services, and makes the case for and against each of them. The case for cable includes innovations in plan offerings and technology improvements.

“Cable companies are coming up with less expensive, stripped down plans to compete with cable-replacement streaming services,” CR says, identifying such plans from the likes of Cox and Spectrum. “These low prices are in line with many streaming plans,” the magazine says.

Perhaps even more important to today’s technology-conscious consumer are improvements the cable industry has made in its cable boxes. Not only are they smaller than they used to be, but they include improvements in technology that CR says are a benefit to the experience of subscribing to cable.

“Bulky, old-fashioned set-top boxes are largely a thing of the past, at least for the major TV providers,” CR writes. “Instead, many companies now offer next-generation set-top boxes with modern interfaces and support for newer TV features, such as 4K video with high dynamic range (HDR). Some now offer apps that let you access online streaming services, such as Netflix and YouTube.

“More cable boxes also include voice capability and compatibility with Amazon Alexa or Google Assistant, so you can use voice commands to change channels or search for shows and movies,” CR says.

However, the case against cable still comes down to its cost, even as subscription fees for the streaming services inch upwards. CR says the average annual bill for cable TV in American TV households is $1,200 (according to Kagan).

But what really galls consumers, according to feedback from Consumer Reports members, are the extra fees that cable companies tack on to their bills. It is a subject CR has railed against for years.

Consumers complain that the bills they eventually receive from their cable company after they sign up are higher than they anticipated. “These days, the rate you see in an advertisement may only be about three-quarters of the total bill that comes in the mail, once fees and taxes are added in,” CR writes.

As for the streaming services and so-called cable-replacement services, CR’s case in favor of them includes lower fees, no monthly rental of a set-top box (or hardware of any kind) and no confusing fees.

On the downside, CR notes that “live local broadcasts aren’t available from every service in every TV market -- and entire channels are missing from certain services. … The savings vary too. Cable-replacement services are still typically less expensive than cable TV, but the gap is eroding.”