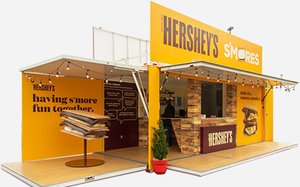 Hershey’s and Werther’s Original are both using their emphasis on sweet things to respectively, attempt to bring neighbors closer together, and help consumers revisit blissful childhood experiences.

Hershey’s is rolling out mobile snack-making facilities in the latest iteration of its “Heart Warming” tour at the local level to promote s'more’s snacks on National S'more’s Day on Aug. 13 in Morrisville, North Carolina. (Each year for the past three, the town changes its name to S’Morrisville to celebrate the occasion.)

Long associated with s’mores — the calorie-laden, chocolate-marshmallow-graham cracker concoction — Hershey’s claims that 31% of Americans don’t know their neighbors. So the company literally drops in on a given neighborhood with a mobile cooking station to encourage people to mingle together outside while ingesting fresh-made s’mores.

In one video chronicling the Heart Warming effort, neighborhood residents talk about not knowing who lives next door or a few homes away, and lamenting the loss of community interaction with which they grew up.

The concept behind the Werther’s Original “A Little Piece of Bliss” campaign, which kicks off Aug. 12, is to celebrate through video and other assets a variety of universal, positive childhood moments to help consumers develop a greater emotional connection with the brand. Examples include parents hugging or sharing candy with their children.

Along with an integrated marketing campaign that will include digital couponing, social media, banner ads and television spots, Werther’s Original has secured sponsorship visibility during “Wheel of Fortune” and “The Price is Right” programming.

For two weeks in September, the brand will be the exclusive “Wheel of Fortune” Bonus Round sponsor, with exposure above the puzzle board and in recap slides and voiceovers -- including the brand name spelled out on the puzzle board.

For two weeks in late September/early October, Werther’s Original product flavors will be featured as part of the game play during “The Price is Right.”

Why those two shows? “They have strong reputations and highly engaged audiences, many of which consist of our target audiences who regularly watch one or both of these top-rated game shows,” says Werther’s Marketing Manager Katelin Lindley.

“Additionally, these shows align nicely with our new creative campaign… as for many viewers, watching their favorite game show is their moment of bliss.”