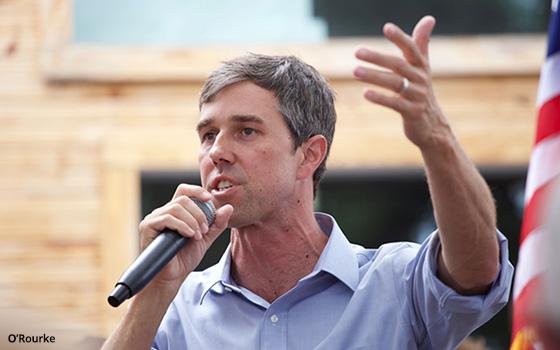 In a post titled “Combating hate and violence in America,” O'Rourke proposed that social media companies create systems to remove “hateful activities” on their platforms.

He defines hateful activities as “those that incite or engage in violence, intimidation, harassment, threats, or defamation targeting an individual or group based on their actual or perceived race, color, religion, national origin, ethnicity, immigration status, gender, gender identity, sexual orientation or disability.”

O'Rourke says he supports stripping social media platforms that do not create such systems of the protections of Section 230 of the Communications Decency Act.

The proposal comes nearly two weeks after a white supremacist killed 22 people at a Walmart in El Paso, Texas -- one of the areas within the district O'Rourke represented in Congress. Minutes before that shooting, an anti-immigrant manifesto was posted online at 8chan, a message board frequented by white supremacists.

At least some of the “hateful activity” O'Rourke is targeting is protected by the First Amendment's prohibitions on censorship, according to Berin Szoka, president of the libertarian group TechFreedom.

“There's no such thing as 'defamation against a group,'” Szoka says. “That's not a thing under American law, because of the First Amendment.”

The First Amendment protects a broad array of offensive speech, including speech that is racist and sexist, but doesn't protect unlawful speech, such as incitement to imminent violence.

Any proposed legislation that encourages companies to censor speech that is offensive but legal would likely face a First Amendment challenge, Szoka says.

“No one really knows how the courts would deal with this, because there's no direct analogy here,” he says. “It absolutely would get litigated, and there's a very significant likelihood that it would run into First Amendment problems in court.”

O'Rourke isn't the only politician seeking to revise Section 230. Earlier this year, Sen. Josh Hawley (R-Missouri) proposed stripping platforms of their immunity, unless they prove to the Federal Trade Commission that they don't discriminate based on politics or viewpoint.