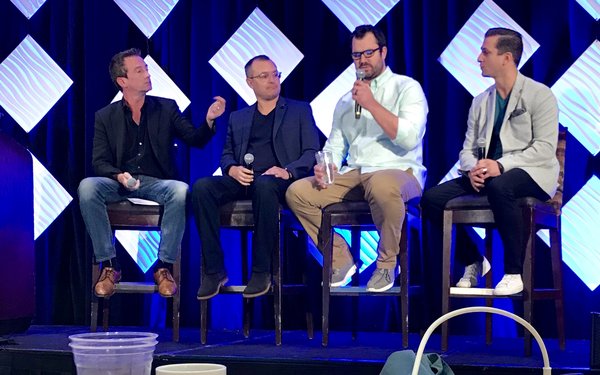 Nick Martucci, Director of Marketing, Westgate Resorts (above, right), spoke on a panel at Thursday's Data & Programmatic Insider Summit, about the use of first-party data.

"We're just going through basics. We have different divisions. One acts almost like a travel agency; it can book vacations but they won't be staying at a Westgate Resort. In another, you have people coming in, getting a great rate, going on a tour and becoming an owner.

"We don't target owners as acquisition, it's more about getting them to come back. If you are loyal enough to purchase an ownership from us, why not take, say, a weekend in New York? We're treating properties as if they are hotels.

"From a data perspective, we're a bit reactionary. It's not necessarily the right way to go about it and we are shifting that way of thinking with the executive team but it takes time.

"From the data side, it's understanding the right way to reach someone. If you didn't have a great experience, I don't want to spend dollars to get you back. We take into account how the media is performing but also what is the experience on the property. I'd rather retarget those posting four- and five-star rather than those who complain about how small the rooms are in New York. Sorry, but I guess you've never stayed in a hotel in New York because the rooms are just not that big.

"We're starting from a tech standpoint with Salesforce. We're onboarding Salescloud, we have a big call center. We're trying to shift it to be more digital, that's part of my job. With Salescloud, we've decided to onboard Marketing Cloud. First-party data leveraging is the most important.

"We're a very email-heavy company. We want to get to where we're leveraging a database of people who've come more efficiently. The checklist is there. We're prioritizing how to tackle those short-term vs long-term commitments. What's the priority from a marketing standpoint? With Salesforce, we built out the audience journey. We're a more revenue-first approach. We're starting with more complex ones (owners vs weekend vacationers) and building that out."