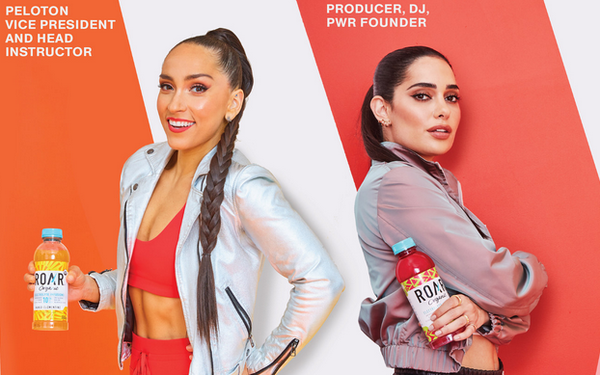 There are role models and then there are Roar Models, four innovative females picked by Roar Organics for a campaign aimed at inspiring and enticing millennial consumers.

It’s the first major branding effort from a company whose roots were planted in the kids’ sports drink category in 2013, but decided about three years ago to pivot to “functional” drinks for adults.

The subsequent success of low-sugar Roar Organic — whose key selling points include being USDA-certified organic, with electrolytes, antioxidants and B vitamins — is separately being leveraged in the rollout of Kids Roar drinks, coinciding with the back-to-school season.

“We partnered with these four inspirational women to highlight how they use their voice and their journeys and not just show the outcomes that are typical on social media,” Roar Organic CMO Eric Berniker tells Marketing Daily. The campaign initiative was led by Roar Organic with support from Covet Public Relations.

In one campaign video on social media, Johnson talks about founding Create & Cultivate and offers advice to potential startups with the goal of “cultivating a community of women that will empower one another to take their careers to the next level.”

The campaign includes a contest in which people can share their own work-related experiences and win a trip to New York City in November to attend the Roar Models Conference in celebration of National Entrepreneurship Month.

Roar Organic isn’t a sports or energy drink but is more in line with enhanced waters, according to Berniker. “We’re in the functional beverage set. It’s a drink that people can drink throughout the day,” he says.

Following its shift to Roar Organic from its original name Roar Beverages, positive business results led to a capital infusion of $5.6 million in late 2018 from AccelFoods, a venture capital fund that invests in food and beverage companies. “And with that we became a whole new organization,” says Berniker, who joined Roar in early 2019.

Roar Organic, which is available at retailers including Duane Reade, 7-Eleven and Fresh Market, hopes to be in some 10,000 doors by year’s end, according to Berniker.

The company is currently rolling out Kids Roar starting with HEB and Wegmans. KIds Roar also is available on Amazon.