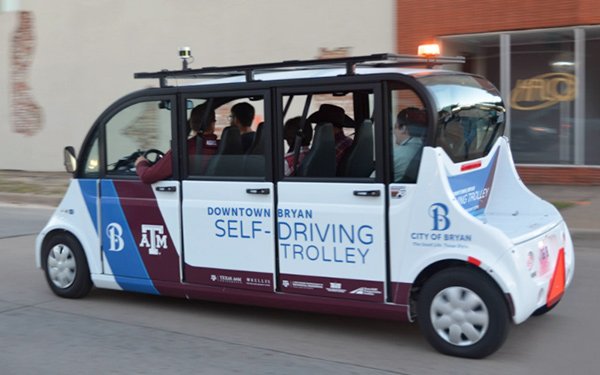 Texas A&M University is adding a twist to its driverless shuttle program.

Now the school is adding teleoperation technology from Designed Driver to its shuttles. The first phase will be to integrate the remote assistance technology into the A&M shuttle autonomous system.

The system ultimately will allow remote control of vehicles in the event of obstructions, challenging road conditions or sensor malfunctions, according to Designated Driver.

“With remote driving, the teleoperator fully takes charge of the car, using the cameras and sensors in the vehicle to maneuver it,” states the program announcement. “In most real-world scenarios, the autonomy system is fully functional but simply unable to determine the safest path forward.”

“The objective for these trolleys is to replace the need for some of the cars that clog up downtown,” associate professor Srikanth Saripalli said at the trial last year. “Downtown Bryan is perfect for this research because there are a lot of pedestrians and the city wants to make it a more walkable area. It’s a perfect environment for testing how these shuttles can actually work in the real world.”

As in most autonomous vehicle trials, the A&M shuttles carry a safety driver.

The Designated Driver technology is intended to eventually replace the safety driver, though the vehicles will still include a “safety navigator” to provide support and educate the passengers on the technology.

Earlier this week, Sony and Yamaha Motor Company introduced an autonomous vehicle that can stream advertising to both the inside and outside of the self-driving vehicle.