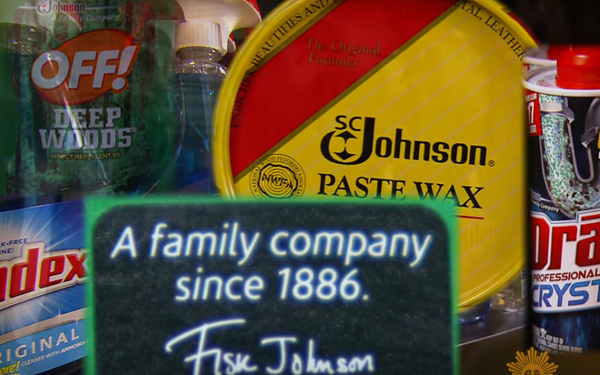 Let’s make this clear. It was the Johnson & Johnson drug company that on Monday was fined $572 million by an Oklahoma judge for its role in the opioid epidemic the state says has killed as many as 6,000 people there since 2000.

That publicly traded company, based in East Brunswick New Jersey, produced much of the ingredient used in the painkiller.

But Johnson & Johnson is NOT the SC Johnson Company. The latter makes products like Pledge furniture spray, Windex window cleaner and Saran wrap. Its products probably haven’t had a role in killing much of anything except cockroaches (Raid) and mosquitoes (Off!).

On Tuesday, though, Fisk Johhson, the chairman and  CEO of SC Johnson and the fifth Johnson family member to run the 130-year old  company, threatened to sue Oklahoma’s attorney general Mike Hunter for using SC Johnson’s tagline (“A Family Company”) in statements to the press about the opioid trial, as if it’s the slogan for Johnson & Johnson.

“I have written to you on several occasions [that]  ‘A Family Company’ is the tagline of SC Johnson, not Johnson & Johnson,” Fisk Johnson wrote in a letter to Walker, the company disclosed to the media.

“When you first used our tagline in May, and we reached out to your office, the Counsel for the State offered to make it clear on the record that SC Johnson is not associated with Johnson & Johnson in any manner.”

S.C. Johnson is privately held and based in Racine, Wisconsin, with over $10 billion in annual sales.

He says he told state officials to cut it out a long time ago. “When this trial began, I raised the issue with Governor Kevin Stitt and Attorney General Mike Hunter that a critical part of our trademark tagline, ‘A Family Company,’ was incorrectly associated with Johnson & Johnson in the state’s opioid legal filing.”

A spokesman for Walker has now said “it is regrettable if someone did” confuse the two companies based on the attorney general’s statements. “The reference to Johnson & Johnson as ‘a family company’ comes from the way it tries to appear to the public. Our trial, in part, was about unmasking this company for what it was found guilty of yesterday: being the kingpin behind the deadliest man-made epidemic in our nation’s history,” he said, according to CNBC.

But that response didn’t placate Fisk Johnson, who shot off a letter to Walker on Wednesday angered that the spokesman repeated that Johnson & Johnson is a "family company."

SC Johnson wants Walker to "affirmatively commit" to stop using that phase in reference to the drug company -- or "as I have said before, we will be forced to take further action."

For SC Johnson, explaining itself must be old hat by now. In fact, its website features a section called “Who We Are" that begins,  “What is SC Johnson?” and allows that  “there’s occasionally some confusion. To set the record straight…”

In an extremely flattering portrait of the company on “CBS Sunday Morning” in 2016, correspondent Lee Cowan’s first words were to note it has “a simple but oddly forgettable name,” and Fisk Johnson agreed the  company knows the problem.  “Oh yeah, we get it a whole lot, yeah,” he said, even though his signature is on all of its packaging.

Fisk Johnson seemed sensitive his complaint may seem frivolous.  “This is a very difficult letter to write because the opioid crisis is such a terrible tragedy which has devastated many families,”  he wrote on Tuesday.

“I can’t possibly imagine what it’s like for those families who have lost family members, and it is so important that this crisis be solved. While this issue on which I am writing pales in comparison, under the circumstance, I feel compelled to stand up for the 13,000 hardworking people of SC Johnson.”