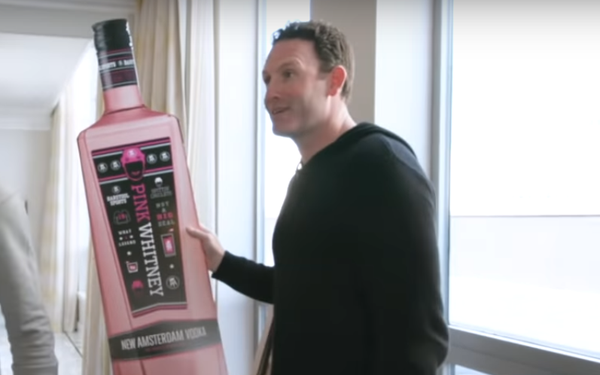 New Amsterdam Vodka is unveiling Pink Whitney, a flavored vodka that owes its existence to a joke routine seen on the irreverent website Barstool Sports.

Last October, former NHL defenseman Ryan Whitney, host of Barstool’s podcast “Spittin’ Chicklets,” shared that he liked to spike his New Amsterdam cocktail with pink lemonade. The incongruity of that — a hockey player favoring a drink that seems kind of frilly — was funny enough to  fans that they coined the recipe  “The Pink Whitney.”

New Amsterdam is a major “Spittin’ Chiclets” sponsor. (The podcast title is a reference to the visual when a hockey player gets hit so hard his teeth are knocked out.)

And that’s how Pink Whitney began its journey to liquor stores. “It became, in a sense, a viral sensation,” says Michael Sachs, director of marketing  for New Amsterdam parent E & J Gallo.

Still, it doesn’t seem like a drink for a hockey player or a fan. That quirkiness is “a big part of the reason the recipe went viral,” says Sachs — and he expects that quirk will lead to more popularity for the actual drink. Sachs says Pink Whitney is not planned as a limited stunt offering, but envisioned as a brand that will be around for good.

The bottle comes decked out with the "Spittin’ Chicklets" and Barstool Sports logo and Whitney’s number 19 jersey with the inscription “What a legend” beneath it.

It will also get a strong push in college towns where the school has a strong hockey team. To Sachs, that especially means Boston, where Whitney also played and where Barstool Sports is headquartered.

New Amsterdam’s  association with hockey was fortified last October when it signed a multi-year deal to become the official vodka of the National Hockey League.

Launched in 2011, it claims to be the spirits brand to sell a million cases fastest in its first year of existence. It’s now among the very largest vodka brands, helped by its relatively low price and by doing a good job targeting younger men.

By using social media, a vodka brand can get a lot of visuals and information out to consumers that wouldn’t fly on traditional media.