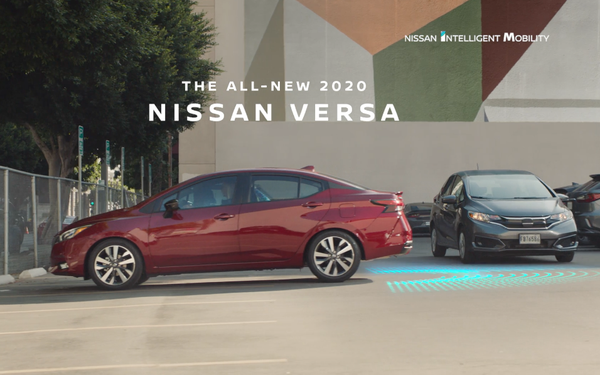 Nissan North America is highlighting its technology by comparing features to everyday occurrences in a campaign for its all-new 2020 Nissan Versa.

Hustling to get ahead is the inspiration of Nissan’s latest integrated marketing campaign, “Fuel Your Go,” which plays up how Versa’s dramatic new design and Nissan Intelligent Mobility technology support those out hustling regardless of the time of day, says Allyson Witherspoon, vice president, marketing communications and media, Nissan North America.

"They're kind of up-and-coming in their career, taking that next move," Witherspoon tells Marketing Daily. "They're really kind of the hustlers, and that's why we wanted to create an anthem for them. These are people who are always on the go. They're getting after it. And we wanted to celebrate them.”

In October, Nissan will also launch a series of digital online videos designed to humanize the technology of the new Versa. In one video, a daughter stops her dad from sitting on a cat as an example of Rear Cross Tracking Alert.

“What's great about the Versa is that it is an incredible compact car, but there's also all of this technology that's in it -- which is exactly what this type of audience is looking for and what they need in their everyday life," Witherspoon says.

“Not only is Versa’s tech-that-moves-you an essential message within the campaign, it is also the guiding principle of the campaign strategy,” Witherspoon says. “We intentionally utilized technology and high tech partners like Google, Facebook, Twitter, and Snapchat to deliver the message to consumers wherever they are.”

Comprised of more than 100 unique assets, the Versa campaign will be rolled out with new messages over the next few months.

It begins with a new commercial titled “Good Night, Good Morning.” The commercial features a young couple working opposite shifts — one starting at midnight, one days. They share a special moment while trading keys for their 2020 Versa in between shifts.

Nissan also is partnering with Google to test Director Mix, a technology that allows an advertiser to create thousands of video ads all using a single creative asset.