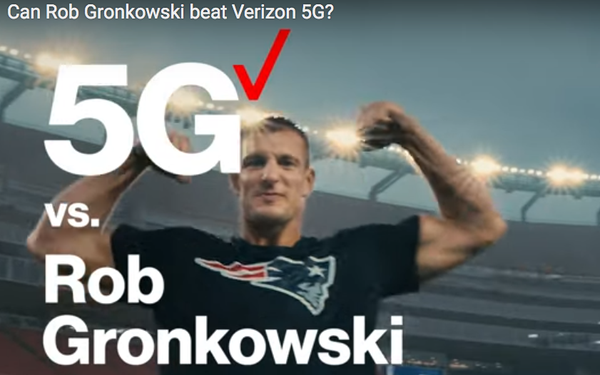 The NFL season kicks off Thursday night — and in a bigger way on Sunday, providing  a major marketing opportunity for Verizon and AT&T to showcase their 5G deployments.

Verizon says it’s expanding its footprint to 13 stadiums in time for the inaugural games, giving  some spectators the ability to see 5G’s faster speed and enhancing features in action.

AT&T will concentrate its 5G gee-wizardry at just one place: AT&T Stadium, home of the Dallas Cowboys. It will help fans in the stands create a their own touchdown dance in 3-D using 5G in the stadium’s Hall of Heroes, or hang with virtual Cowboys players using a 5G phone and a 5G-capable mobile hotspot provided by Netgear.

Some fans can see game statistical data overlaid on the playing field, or use AR to play a video game against football robots trying to tackle them.

Fans can use Samsung Galaxy S10 5G smartphones, provided to test by AT&T to see 5G in action, because very few people have purchased 5G phones yet.

Verizon is using the first games to tout its 5G Ultra Wideband capability in a new commercial that will debut with Thursday night’s game. The ad tells viewers that being in 13 stadiums (with more to come) is a very big accomplishment.

Further down the road, Verizon will develop in-stadium mobile features using 5G, create one or more mobile games to showcase 5G power and low latency, and explore the use of  the emerging format called volumetric video.

Those features are part of the deal the company made with the NFL to become the “The Official 5G Innovation Partner of the NFL.”

Except for fans at those football stadiums with access to a 5G phone, this week’s AT&T and Verizon exhibitions are news most can’t use. Only a handful of cities have 5G services, and in those that do, such service is generally limited to a few neighborhoods.

Not many 5g phones will be sold this year, but confusion seems in abundance.  Counterpoint Research says only 5 million will be sold in 2019, and consumers are buying them in places that still aren’t 5G-capable.

Decluttr, a website that sells refurbished cell phones, says in its own consumer survey that about a third of consumers falsely believe they already have a 5G phone.