P&G Cleans Up In Detergent Category 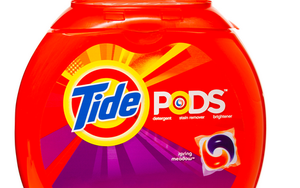 Procter & Gamble has been cleaning up in the detergent and fabric care categories by focusing on speedier innovation and premium iterations of brands like Mr. Clean and Tide.

According to CEO and President David Taylor, speaking at Barclays’ Global Consumer Staples Conference last week in Boston, the U.S. fabric care segment has grown 500% over the past four decades. He credited much of the rise to “meaningfully superior unit dose detergents” like Tide Pods and Gain Flings.

And there’s room for even more growth since 28% of U.S. households now use a unit-dose detergent — up 12 percentage points over the last three years — while in the U.K. and Poland household percentages are 33% and 50%, respectively.

Taylor explained why premium innovations represent better value for both consumers and retailers. “In the U.S., Tide value-add pods are a 25% price premium to base Tide Pods, which are a 25 percent premium to Tide liquids, which are a 100% premium to the balance of the market,” he said. “Close to 40% of our pods business is in value-adds.”

Although General Mills  hadn’t sold pet food for 50 years when it acquired Blue Buffalo early in 2018 for $8 billion to access one of the most profitable aisles in supermarkets. Now pet food accounts for roughly 8% of GM’s annual net sales of $16.9 billion, according to

Blue Buffalo has only been available in food, drug and mass-merchandise stores for about two years. With the launch of sub-brand Wilderness, Blue Buffalo now is eyeing distribution at drug and club stores as well, according to Bishop.

In food for humans, GM has seen improvements in its cereals portfolio but needs to rejuvenate its offerings in snack bars, which include Nature Valley and Fiber One. Hence the recent launch of Nature Valley wafer bars and a refresh of 75% of the Fiber One line to reduce their calorie count, sugar and net carbs.

Just over a year ago, Tilray became the first cannabis company to go public on a major U.S. stock exchange, but in less than a decade it’s quietly become one of the biggest players in the $150 billion global cannabis market, the company claimed at the conference.

“It’s early days. We’re in the first inning of the development of this global industry,” said President and CEO Brendan Kennedy, noting that Tilray recently attracted executive talent from an array of companies including Coca-Cola, Diageo, Nestle, Nissan and  Starbucks. “Honestly, these people wouldn’t have come into this industry two years ago.”

Much of Tilray’s medical, CBD/hemp and adult cannabis use operations are in Canada, but in April of 2019 the company acquired Manitoba Harvest, the world’s largest producer of natural foods containing hemp. Manitoba’s hemp and CBD products are now available in some 13,000 U.S. retail outlets. “We bought them for the supply and distribution channel relationships,” Kennedy explained.

Even though Tilray is a major global supplier of cannabis in flower form, it’s holding back from competing in U.S. states that have legalized adult use. “We’ve made a decision as a company to only operate in federally legal markets,” says a company spokeswoman in response to a query from Marketing Daily.

In the meantime, Tilray is ramping up marketing partnerships with Authentic Brands Group, whose 50 brands include Nine West and Juicy Couture, with CBD-hemp product launches expected by the end of 2019. In addition, Tilray just acquired Smith & Sinclair, a U.K. based purveyor of alcohol-infused gummies and lollipops, for a CBD and hemp extract line “that we’re excited to introduce to the U.S.,” said Kennedy.