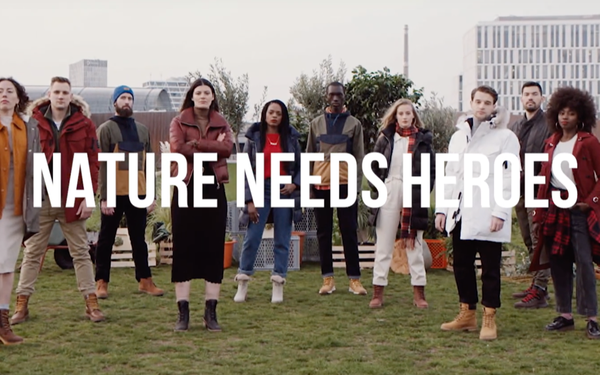 Timberland’s been an earth-friendly brand for decades, but it’s never specifically focused on that quality in an ad campaign -- until now.

The company is launching a marketing campaign called “Nature Needs Heroes.” Ads highlight Timberland’s latest fashions by focusing on 12 eco-influencers, along with an ambitious goal of planting 50 million trees in the next five years.

“Timberland has a long history of doing well by doing good,” says Kate Kibler, vice president of marketing & DTC, the Americas. That includes 27 years of offering community service hours for employees, along with the 2007 launch of Earthkeepers, which broke new ground in sustainable sourcing. But "this is the first time that we’re bringing this to life for our consumers," Kibler adds. "While we’ve always shared that information in the industry, we’ve never fully presented it to consumers.”

The12 different eco-heroes celebrated in the campaign each wear new Timberland clothing and footwear and are shot against city greenscapes.

Ads are running globally, in digital, print, out of home, and social media.

“These brand ambassadors talk about their efforts, and we’re asking consumers to come live a greener life with us,” Kibler tells Marketing Daily.

The campaign enlists consumers in the cause right away. In stores, consumers can pledge $1, and the company will plant a tree on their behalf, partnering with American Forests. In online channels, when people choose the earth-friendlier ground shipping method over three-day air (both are free), Timberland plants a tree as a result. In just two and a half weeks, 20,000 have already chosen that option, Kibler says.

Spring Studios is the ad agency.

The Stratham, New Hampshire-based Timberland says the new effort builds on its tree-planting successes so far: Since 2001, it has planted 10 million.

Trees are one of the most effective strategies for climate change mitigation, and the company cites new research that a worldwide planting program could remove up to two-thirds of emissions. (Trees clean air by removing carbon and releasing oxygen, cooling air through evaporation, preventing erosion and saving water.)

The effort includes partnering with many organizations focused on large-scale regreening. In its first year, the campaign focuses on Haiti, China, the Dominican Republic, the U.S., Tanzania and Mali. It includes the Great Green Wall, an African-led movement to grow an 8,000-kilometer line of trees across Africa, aimed at fighting climate change, drought, famine, conflict and migration.

Timberland is owned by VF Corp., which also owns brands like Vans and the North Face. Sales at Timberland declined 1% in the most recent quarter, due to softness in its classic footwear line. Apparel and non-classics are growing in the high single-digits, and sales are up 10% in its D2C channels.