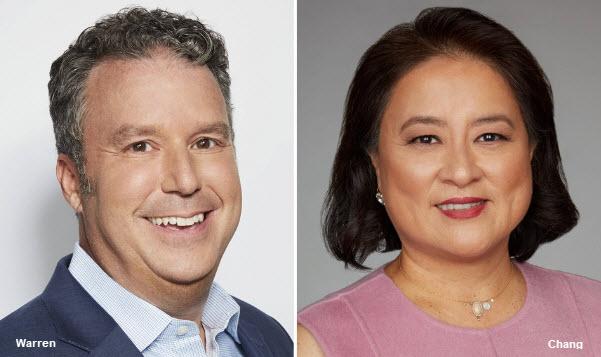 WarnerMedia Sales & International announced that Sofia Chang and Rich Warren have been named to lead its distribution business.

Both will have the title president, WarnerMedia Distribution, and will share oversight of distribution for all Turner channels, HBO, Cinemax, and the new streaming service to launch next spring, HBO Max.

The appointments are the latest changes in the Turner and HBO units since AT&T’s acquisition of Time Warner in 2018.

Warren and Chang will report to Gerhard Zeiler, who earlier this year was promoted from head of Turner International to chief revenue officer for WarnerMedia and president of WarnerMedia International Networks.

Chang and Warren report to Zeiler. The two will be tasked with garnering digital and linear distribution partners for the nascent HBO Max streaming service, targeted for debut next spring.

Chang, previously executive vice president of global distribution for HBO, held several positions in the company since joining it in 2000. She has led the transactional digital and physical distribution of HBO and Cinemax programs worldwide and, since 2015, has been responsible for distributing HBO and Cinemax subscription services on all digital platforms.

Warren “has been key to the growth and success of Turner’s content distribution with both its traditional and digital partners,” according to the announcement.

The company also took the opportunity to describe the bringing together of its distribution business as “a further example of how WarnerMedia will be collaborating and working as one company.”

WarnerMedia’s strategy is one focus of criticism for Paul Singer’s Elliott Management Corp., the hedge fund that now owns a $3.2-billion stake in WarnerMedia parent AT&T, and is pushing a plan to shake up the telecom.

“We will have two hugely experienced leaders who know our business inside out,” said Zeiler, in a statement in the announcement. “Over the last few months I have worked closely with both. Sofia’s experience and success in driving HBO’s digital subscriptions has been of great value as I have looked to understand the US HBO business in greater depth and detail, and Rich has brought his strategic skills to the table as we have sought this way forward. Working together both will provide the strategy and direction needed to enable future growth.”