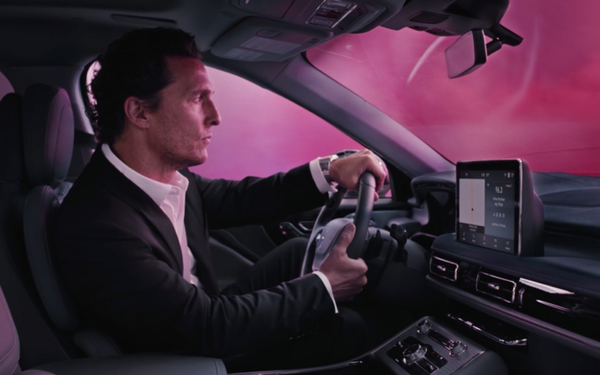 Themed “Fresh Take On A Moment,” the broadcast spot debuts during the Notre Dame Football game on Sept. 14. The effort also includes OOH.

“The name refers to our fresh take on movement and highlights how different we are from our competitors,” says Eric Peterson, Lincoln marketing communications manager, in a release. “We don’t focus on such aggressive, over-the-top performance. When you’re in a Lincoln Aviator, we want the whole experience to simply make you feel better.”

The campaign, from Hudson Rouge, features spokesman Matthew McConaughey in a colorful, surreal setting to highlight how the all-new Lincoln Aviator stands on its own, according to the automaker.

Clouds of exotic pink and purple smoke fill the screen as Lincoln Aviator maneuvers through the opening scene of a new campaign spot for the brand’s all-new luxury SUV. A southern-tinged voice rises above a dramatic original score performed by the Detroit Symphony Orchestra, speaking to a feeding frenzy that is ostensibly today’s competitive luxury automotive industry: “Performance comes in lots of flavors,” says McConaughey, alluding to the amped-up, over-tuned excesses proliferating in the market.

At that point, Aviator breaks free from the fray: “Then there’s performance that just leaves you feeling better as a result,” McConaughey continues. “That’s the kind Lincoln’s about.”

“The Aviator is a pretty special vehicle, so here in the fifth year of Lincoln’s partnership with Matthew McConaughey we wanted to create a dramatic film look that was quite different from what we’ve done before,” says Jon Pearce, global chief creative officer of Hudson Rouge. “As the first vehicle that truly expresses Lincoln’s design philosophy of Quiet Flight, we thought having it emerge from a wall of brightly colored smoke made for a suitably grand entrance.”

The spot was directed by Johan Renck, the Swedish director of “Breaking Bad,” “The Walking Dead” and the HBO miniseries “Chernobyl.”

“The purple and pink smoke at the beginning of the spot is a visual metaphor for what we’ve been calling the ‘fray,’ which represents the frenzied focus of the competitive set on amped-up performance,” Pearce says. “In contrast, Lincoln looks at performance a bit more holistically: it’s about the smooth, quiet delivery of power that’s a bit more calming overall.”