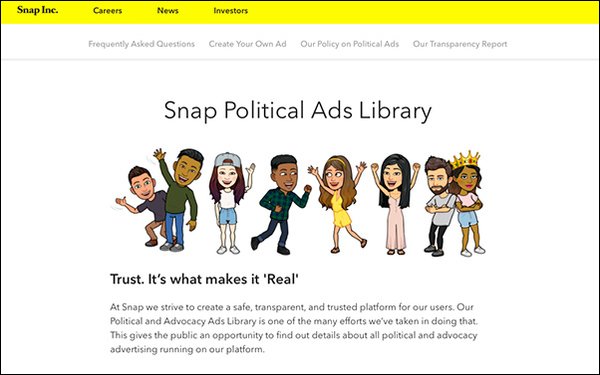 Ahead of the 2020 presidential election, Snap Inc. just launched a political and advocacy ad library.

“This gives the public an opportunity to find out details about all political and advocacy advertising running on our platform,” the company announced on Monday.

More broadly, the point of the offering is to position Snapchat as a safe, transparent, and trusted platform, the company said.

The library features comprehensive lists all the political and advocacy ads that appeared on Snapchat from 2018 to the present, including the ads’ buyers and target demographics.

However, it is not a novel idea.

Facebook and Twitter already offer their own ad libraries, where anyone can survey the many politically motivated ads that appear on their platforms.

Yet, Snap and other social platforms are continuing to invest in transparency-related effort.

This summer, for example, Facebook began rolling out “transparency tools” for those interested in placing ads about social issues, elections or politics.

Along with increasing accountability and responsibility, Facebook said the initiative was designed to cut down foreign interference in domestic elections worldwide, both at home and abroad.

In August, Facebook debuted stricter rules for political advertisers, along with plans to strengthen the authorization process for ad buyers, show users more information about individual advertisers, and update its list of domestic social issues to better reflect the public discourse.

Still, Facebook found some advertisers were adding misleading “Paid for by” disclaimers on their ads.

Despite the risks, social networks stand to profit handsomely from the forthcoming presidential election.

Indeed, The Wall Street Journal recently reported that Facebook’s ad prices were already swelling as Democratic candidates battled it out for the opportunity to take on President Donald Trump in 2020.
advertising, facebook, politics, social media
Next story loading