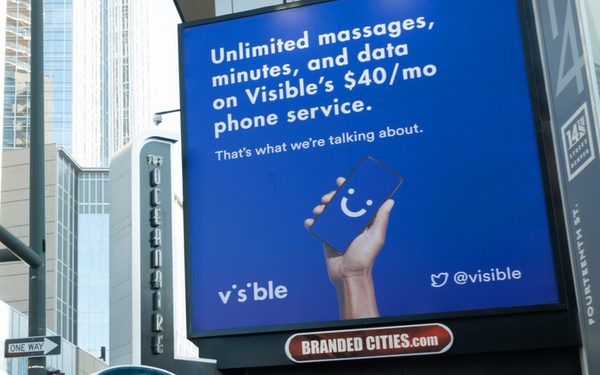 Copy desks are just quaint memories at most places that deal with the printed word, so you’d think that typographical errors wouldn’t raise an eyebrow with the public by now.

Visible, a cell phone carrier, just put up 150 billboards around Denver. One of them read this way: “Unlimited massages, minutes and data on Visible’s $40/mo phone service.”

The misspelling (of “messages,” if you missed it) was all part of a plan to get the public and the press to notice.

Judging by some tweets, the strategy seems to be working.

Visible ‘fessed up to the mistake earlier this week (it had planned to wait until Thursday). And it simultaneously announced that it will offer free massages (yes, you read that correctly) at Denver’s Union Station this Saturday afternoon.

Visible tweeted the intentional typo cat out of the bag Monday.  “When one of our billboards promised unlimited massages instead of unlimited messages, we know ya'll were concerned that we can't proofread good. Surprise -- we can!”

Visible says the tweet’s grammatical, but folksy, error  --  it should be “proofread well” -- was also deliberate. A  spokeswoman explains, “Visible's voice on social media is generally very playful and tongue-in-cheek.”

Visible started in 2018. Its coverage is identical to Verizon’s 4G LTE wireless network -- which makes sense, because Verizon also owns it.

The Visible hook is this: You pay $40 a month per person, including taxes,  for everything -- data, messages, phone calls -- with no contracts. It’s targeted to millennnials who, because of their age and lifestyle, are less likely to need complicated family plans.

It does almost all of its advertising on digital and social media. But Visible decided to test an OOH campaign in the city where it’s  headquartered.

CMO Minjae Ormes says the typo idea came from a “feel-good riffing session” at which somebody blurted it out, and everybody ran with it. The specific “massage” concept grew from that.

And for extra credit, the company expected some publicity and earned media from the billboards.

Early on, a Denver TV reporter, Mekialaya White, snapped a photo of the wrong-spell billboard and posted it online, but didn’t exactly say why. Neither did Visible’s response to her, until now.

And according to Ormes, until just a few days ago, the company responded to tweets pointing out the error with vague rejoinders such as tweeting back “Oh cram.” Also incorrect .

The public response is  “exactly what we wanted to have happen,” Ormes says. One person who saw the error tweeted to Visible, “Maybe you need a copy editor” and offered her services. The happy fact is, Visible is indeed looking for a copy editor, and the woman who wrote was encouraged to apply.

This message/massage mistake is not without antecedent. The title of Marshall McLuhan’s 1967 book about his visionary view of communication was “The Medium Is The Massage.”  It was supposed to be “The Medium Is The Message,” but the printer made a typo on the cover page -- and McLuhan is said to have liked it that way so much he decided to keep it that way, according to his eldest son, quoted on www.marshallmcluhan.com.

mobile
1 comment about "Bad Spelling On Billboard Gets Cell Service Brand Some Attention, Bigly".
Check to receive email when comments are posted.
Next story loading