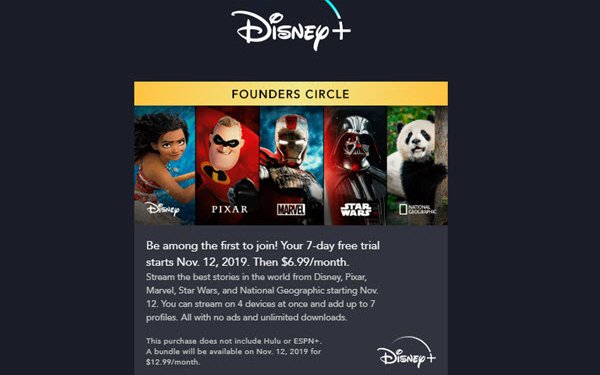 Disney’s latest move to ramp up subscribers for its Disney+ streaming service is a preorder promotion for the stand-alone app that includes a seven-day free trial.

The service’s preview site advises those who want the app as part of a $12.99-per-month bundle with Hulu and ESPN+ to wait until Nov. 12 to sign up.

The preorder pitch stresses that the service will offer “the best stories in the world from Disney, Pixar, Marvel, Star Wars and National Geographic,” simultaneous streaming on four different devices, up to seven profiles, no ads, and unlimited downloads.

Today, on "CBS News This Morning," Disney chairman and CEO Bob Iger said that while he believes people will subscribe to two or three streaming services, Disney+ will enter the market in a "very unique position" because of its large content library and the original product being created under the Disney, Pixar, Marvel, Lucasfilm and 21st Century Fox brands.