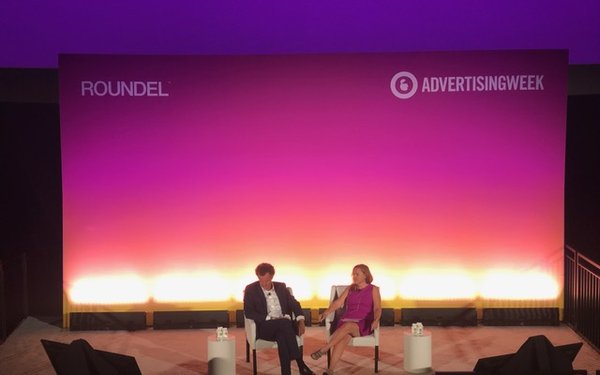 Publicis Groupe Chairman and CEO Arthur Sadoun took to the stage for his first appearance at Advertising Week in New York City to share his thoughts on the Epsilon acquisition, creativity, and the challenges of being a public company during a conversation with Wall Street Journal Advertising Editor Suzanne Vranica.

While Sadoun maintained his consistent messaging about the need for transformation, he did provide some new insights under strong questioning by Vranica.

He admits that Epsilon's $4 billion purchase price was a "big" and "expensive" move, but it was an opportunity the Groupe could not afford to lose. There isn't one client that isn't interested in first-party data, he explains. He adds that the Groupe landed Mondelez as a client solely though this acquisition, and claims the Groupe now has the ability to track 58% of all non-cash transactions in the U.S., with more than 250 million profiles.

Sadoun said the Sapient acquisition was harder for investors to understand, explaining that it was a more "visionary" deal when it was completed four-and-a-half years ago.

As it juggles creativity and data, Sadoun asserts there is a new breed of creative talent flocking to the industry. This infusion is perhaps best exemplified by the Groupe's own internal evolution.

Earlier this year, the holding company’s top creative leader Nick Law departed for Apple, opening the door for new visionaries whose backgrounds incorporate non-traditional and multifaceted roles -- specifically, Sapient's John Maeda, whose creative talents meld into Silicon Valley and technology, as well as strategic guru Carla Serrano and more traditional creative leader Liz Taylor, who joined the Groupe this summer, are all eyed as the emerging class of Groupe ambassadors.

Strategy is the "essence of everything," Sadoun said.

Although Sir Martin Sorrell is one of many leaders forecasting potential consolidations among holding companies, Sadoun says he would be "surprised" if they were to happen. At the same time, he would not be surprised if there were consolidations among the consultancies, such as Deloitte and Accenture.

Sadoun said he was thrilled by the Accenture acquisition of Droga5 in May. "It was fantastic," he says. The fact that Accenture paid approximately $475 million or around three times the agency’s annual revenue placed a high price tag on creative, he explains, adding: "There is value in creativity and technology."

Radical transformation is "very difficult" as a public company, since there are always those eager to second guess or publicly dismiss his decisions.