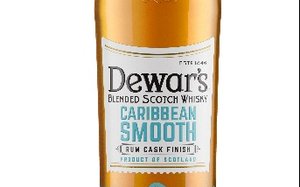 Dewar’s, the venerable blended scotch whisky that’s been around since 1846, is now marketing its Caribbean Smooth version, joining many other liquor brands that have added flavor to their flagship product lines.

To market it, Dewar’s launched a digital campaign called “Speaking Scotibbean,” which attempts to combine Caribbean and Scottish slang into its own kind of language.

On Facebook and Instagram, animations will give a graphic description of the mash-upped words that come out of the Dewar’s word generator. An example: “suavedaddle,” means “a surprisingly smooth exit.”

Because of a recent loosening of Scotch production rules that all the major manufacturers must follow, Dewar’s can now finish the whisky-making process in Caribbean rum casks.

The new product “reflects what we’re seeing in society and ever-evolving blending of cultures,” says Vilcassim. “Additionally, the recent relaxation of rules and regulations surrounding how Scotch whisky is produced, has enabled the category to evolve with various other casks.”

There are more flavors to come. She says, “Watch this space.”

Brian Cox, Dewar’s vice president, explains, “We’ve blended up to 40 single malts and grain whiskies that have laid in casks for at least 8 years, double aged the blend to ensure our distinctive extra smooth Dewar’s profile, and then finished in ex-Caribbean rum casks for a period of around six months.”

Dewar’s isn’t completely new to the flavor idea. In 2013, it tiptoed into that area when it introduced a line infused with honey  -- but as an example of how times have changed, while that was acceptable for the U.S. market, it violated rules set by the European Union and the Scottish Whisky Association. Dewar’s Honey left a bad taste in some purist’s mouths.

Now, to drive home the twinning of Scotch whisky and Caribbean culture, the Bacardi-owned brand is also launching the scholarly-sounding Scotribbean Residency, a three-day promotion at New York’s Gitano NYC, a tropical-styled and Caribbean-tinged  watering hole in downtown Manhattan. It starts Thursday night.

It will feature appearances by Puerto Rican model Joan Smalls as the celebrity ambassador and  will bring together famed bartenders including Scotsman Iain McPherson and Nicole Fas from Puerto Rico. They and other barkeeps will invent drinks and games, or so Dewar’s says.

As for putting a Scotch twist on the Caribbean, Vilcassim says It’s not as strange as you might think. “Many people would be surprised to learn that whisky is actually equally as popular as rum in the Caribbean islands, particularly Puerto Rico, where locals typically mix it with fresh coconut water.”