New For Fall: ABC Series Revival Is The 'Darndest Thing' 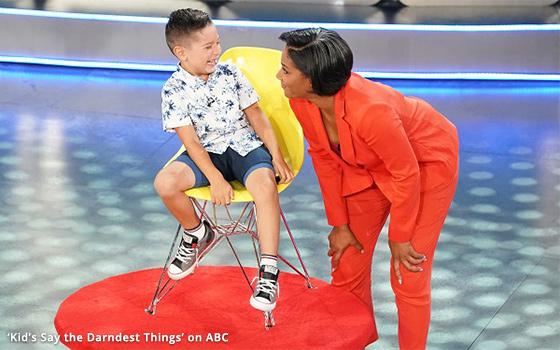 It's the darndest thing: You might think that a TV show that consists of small children saying cute, funny or even “the darndest” things might make for charming entertainment.

But if you think that, then you would be very wrong. For proof I present ABC's revival of the “Kids Say the Darndest Things” concept premiering this coming Sunday night (Oct. 6) in the very heart of prime time, 8-9 p.m. Eastern.

I'll be darned if this wasn't the most charmless show I have previewed for the TV Blog in darn near five years of doing this.

Let's start with the show's opening, which included a montage of quick clips that were meant to showcase some of the cute, funny and darndest things that kids would be heard saying on the new season of “Kids Say the Darndest Things.”

Apparently, one little boy who will be interviewed on stage by the show's host, comedian and comic actress Tiffany Haddish, will be asked about a business he has taken up -- offering to wash other people's bowling balls.

So she asks this boy to tell her how he pitches this service. And he says: “I ask, Would you like your balls polished or cleaned?” In response, the studio audience howls with laughter while this little boy sits there wondering why they're laughing at him.

Meanwhile, I'm watching this thing and thinking: When did our family entertainment -- and everyday family life in general -- become like an old Redd Foxx record or Buddy Hackett routine?

Sure, I realize just citing these two ancient examples of off-color comedy threatens to mark me as old-fashioned. But the “Kids Say the Darndest Things” concept is a lot older than I am, having originated on the radio in the 1940s.

It persisted into the 1960s as a regular feature of Art Linkletter's TV shows, and then emerged as a full-fledged TV show with Bill Cosby for two seasons in the 1990s. Now it's back for an hour on ABC with a host -- Haddish -- who exhibits little or no rapport with children.

She seems much more obsessed with her status as a celebrity who counts various other celebrities, who she name-drops incessantly, as her personal friends. This obsession first emerges in a minute or two of stand-up that she performs at the outset of the show by way of introducing herself to the audience.

Later, she informs three little girls that she can phone Taylor Swift directly to say hello while they scream and squeal at the possibility that they might even get to say hello to one of their idols on the phone.

Unfortunately, though, Tiffany seems to get only Taylor's voicemail or some such, and the whole thing, which sucks up valuable network minutes, goes nowhere. Moreover, it is as if the show has been designed for this grown-up to fool these small children.

This is the entire theme of one of the other bits on this Sunday’s premiere. In this one, Tiffany hosts three child actors on a Hollywood backdrop to film a commercial for “dessert ketchup,” a fictional product that Tiffany slathers on desserts such as slices of cake and then demands that the children eat it -- and act like they are enjoying it -- for the sake of this fictional commercial.

No portion of this segment works in any way. Indeed, the same can be said about the rest of the show too. In the final analysis, none of these kids say “the darndest things.” In fact, they don't even come close. And if that’s the case, what's the point?