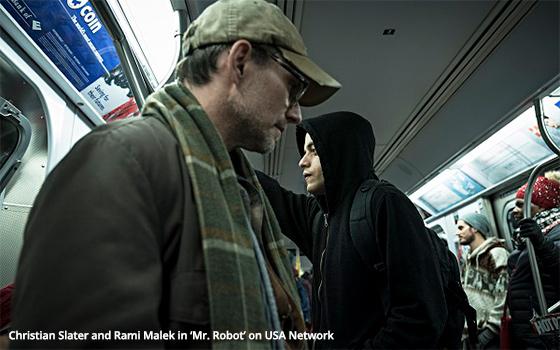 The creator of “Mr. Robot” turns up in the premiere episode this weekend of the show's fourth season to say good-bye.

It is a fitting cameo role for him because this new season, comprising 13 episodes, will be the series’ last. The creator's name is Sam Esmail, and he is the director and writer of this weekend's season premiere on USA Network (Sunday night at 10 Eastern).

The episode's running time is just about 60 minutes. According to USA's Sunday night schedule, the show will likely run with limited -- or possibly even no -- commercials.

Esmail has been the show's principal writer for its four-season run, and its executive producer. “Mr. Robot” premiered in 2015, which means Esmail has lived with this show and its dark depiction of a wired world gone haywire for more than four years. He deserves a rest.

He also has every right to insert himself Hitchcock-like into this final go-round to say farewell, especially since the good-bye he utters fits seamlessly into the episode's storyline.

He and everyone else who has worked on this filmed-in-New-York TV show have done a fine job. They have effectively created a world of tension, unease and paranoia that feels sharply similar to our own. When watching the show, we do not know whether to regard it as wildly exaggerated or right on target.

Moreover, unlike other TV shows or movies that deal with similar subject matter, “Mr. Robot” does not take place in some future time. Instead, its timeframe is the recent past -- just a few years ago.

This makes its story even more unsettling, as if the secret, global, digital underworld it depicts has been conducting its clandestine business for years now -- out of sight, but also right under our noses. And isn't this what everybody believes these days?

The new season of “Mr. Robot” begins with super-hacker Elliot Alderson (Rami Malek) and the anarchist known as “Mr. Robot” (Christian Slater) hot on the money trail of the global conglomerate known as E Corp.

In the season premiere, they target a small obscure New York law firm that they find has been operating on the fringes of this sinister corporation, facilitating the documentation the corporation requires to move large sums of money across international banking borders.

For New Yorkers, “Mr. Robot” is a particularly compelling viewing experience. In this weekend's season opener, the action takes Elliot and Mr. Robot from Grand Central Terminal in Manhattan to the Grand Concourse in the Bronx.

In all of the TV and movie production that goes on here in New York, the city is rarely used as effectively as it is in “Mr. Robot.”

But make no mistake, watching “Mr. Robot” is no walk in the park. This is a very disturbing show featuring scenes of violence and coarse language -- all of which is integral to the plot and the world it is depicting.

In this weekend's premiere, the show's characters are strung out (some from drugs and some not), ragged around the edges and emotionally exhausted. And isn't this the way many of us feel right now?