All Hail 'Cash Cab,' The Quiz Show That Will Not Die 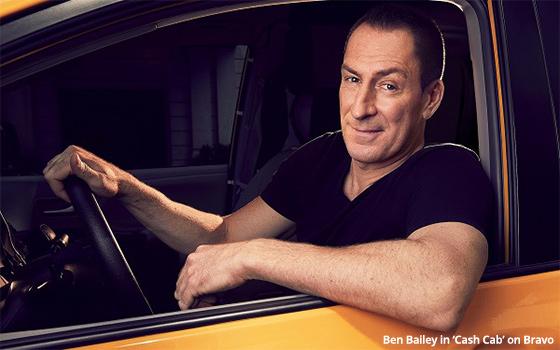 One of the great features of the new revival of the quiz show “Cash Cab” is that nobody involved succumbed to the temptation to update this mobile show's location from a traditional yellow cab to an unmarked Uber or Lyft vehicle.

Certainly, basing this quiz show on four wheels in an Uber would have given it a more modern feel, particularly for viewers who have eschewed the activity of physically hailing a taxi on the streets of New York in favor of waiting on a street corner for an Uber “hailed” on a smartphone app.

Instead, “Cash Cab” plays like a tribute to New York City taxis, an industry that has taken it on the chin from the influx of app-based rides for hire.

In this way, “Cash Cab” promotes an industry that could use a lift (pardon the expression) when it provides random hailers with the sudden opportunity to win hundreds of dollars in the time it will take to arrive at their destinations.

The show's current destination happens to be Bravo, which will introduce it Monday night (Oct. 7) at 11:30 Eastern. The show formerly aired on Discovery Channel, off and on, starting in 2005.

Thankfully, nothing has changed about the show at all. It is still this very simple quiz format in which the cab's driver -- comedian Ben Bailey (who has hosted it from the beginning) -- presents his startled passengers with trivia questions whose correct answers will earn them cash that Bailey hands to them as they leave his cab.

On Monday night's premiere, Bailey will pick up three sets of passengers -- a group of three firemen, a young man and young woman, and a group of four friends (one man and three women).

The excitement and fun that everyone seems to have while riding with Bailey and playing this simple game is authentic, palpable and infectious. In fact, even when one of the three groups cited above leaves the cab empty-handed, they seemed to have had so much fun that losing the game hardly seems important.

Long-time patrons of New York City taxicabs will probably agree that cab rides around here can be a mixed bag -- ranging from good to bad to ugly.

But if there is a chance that the next cab you hail could be a rolling quiz show in which you could win hundreds of dollars in the space of 30 blocks or so, isn't that worth dropping Uber for a while in favor of New York's traditional cab culture?

And here is an inside tip: The ride-hailers in the season premiere of “Cash Cab” were all picked up by Bailey heading uptown on First Avenue in the vicinity of East 57th Street. See you there.

The revival of “Cash Cab” premieres Monday night at 11:30 Eastern on Bravo.

television, transportation
1 comment about "All Hail 'Cash Cab,' The Quiz Show That Will Not Die".
Check to receive email when comments are posted.
Next story loading