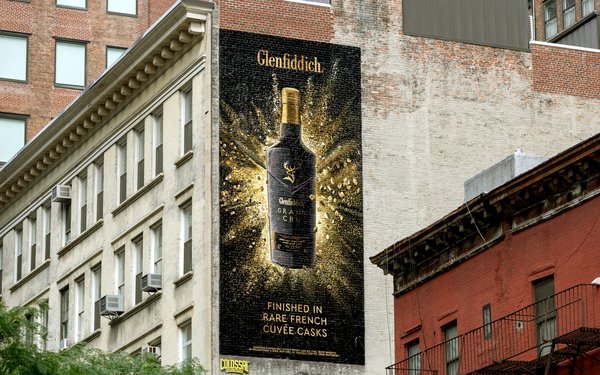 Timed for the holiday season ahead, Glenfiddich Scotch whisky is promoting its new Grand Cru in the U.S. with a campaign centered on digital ads, New York and Los Angeles out-of-home locations and ads in upscale business and lifestyle magazines.

Grand Cru is Glenfiddich’s new single malt finished in French cuvee casks, which the brand is advertising as a liquor “bridging the gap between French refinement and Scottish prestige.”

The billboards and print ads show a bottle surrounded by bubbly golden rays exploding around it, hinting at cuvee Champagne, made from the first pressed grapes in a batch. Generally, cuvee is a term used by winemakers to denote a special blend, usually of sparkling wine.

The advertising is intended to be celebratory, moving away from the imagery of traditional Scotch advertising, according to the company -- ads that presumably dwell on scenes of the Scottish countryside.

Sean Kelly, Space’s business director, said “the stunning packaging “ is an element that, along with the timing of the advertising and the celebration theme sets up Grand Cru as a gift for the holidays.

Glenfiddich is adding moving digital ads, most notably on the giant  “Express Screen” on the northern side of Times Square.

The new Grand Cru is at least the second major Scotch brand to branch off into marketing a drink finished in a non-traditional cask. In September, Dewar’s introduced Caribbean Smooth, a blended Scotch whisky finished in Caribbean rum casks.

The website Scotchwhisky.com says Grand Cru is touted to “contain notes of ‘sweet brioche, pear sorbet, white grape and rich vanilla.'" It was finished for four months in the cuvee casks.

Media planning in the U.S. was conducted by Anchor and Resolute Digital. The painted billboards are being delivered by Colossal Media.