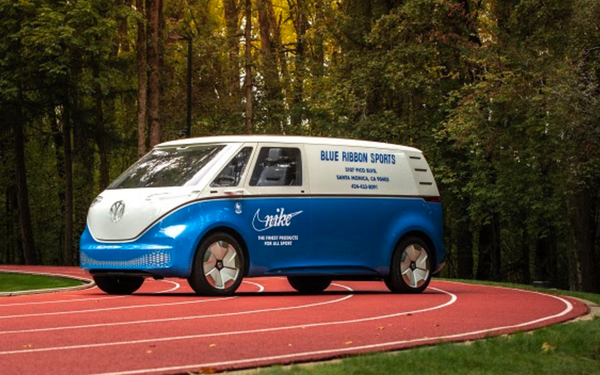 In what may be one of the most unusual automaker partnerships as of late, Volkswagen is partnering with Nike.

The German automaker’s I.D. Buzz Cargo concept vehicle has been outfitted to resemble Nike’s first delivery vehicle, a VW Type 2 Bus. The distinctive vehicle will begin “popping up” across the country.

It’s a creative way to get the brand in front of more potential customers while coat-tailing a bit on Nike’s storied history. Volkswagen had an iconic presence in America, right up until its scandal. Now it's time to begin to rebuild.

Making its first public appearance at Nike’s original storefront in Santa Monica, California, the new-age delivery vehicle will make additional stops in Chicago and New York City, giving running consumers a glimpse at the electrified future of Volkswagen commercial vehicles, and a chance to learn about Nike’s beginnings as Blue Ribbon Sports, which was founded in 1964.

In January 1967, Jeff Johnson, Nike’s first official employee, helped establish the inaugural storefront in Santa Monica. On top of managing the shop, Johnson became known for traveling to local track meets to sell products out of his personal vehicle, a Volkswagen Type 2 Bus.

To play up Volkswagen’s “Drive Bigger” initiative of social and corporate responsibility, the tour includes athletic footwear recycling at each installment.

Utilizing Nike’s Reuse-A-Shoe program, which gives worn-out sneakers new life by transforming them into materials used to create running tracks, playing turf surfaces, and other athletic gear, the two brands will promote a shared focus on sustainability efforts and environmental commitments to athletes and fans all across the country.

“To learn Volkswagen played such an important role in Nike’s early history is a really big deal to us,” says Saad Chehab, senior vice president, VW brand marketing, in a release. VW’s commitment to electrification isn’t just about personal transportation, it’s about moving everything in a smarter fashion, he adds.

As the brand reemerges after the Dieselgate controversy, playing the environmental card seems like a good move.