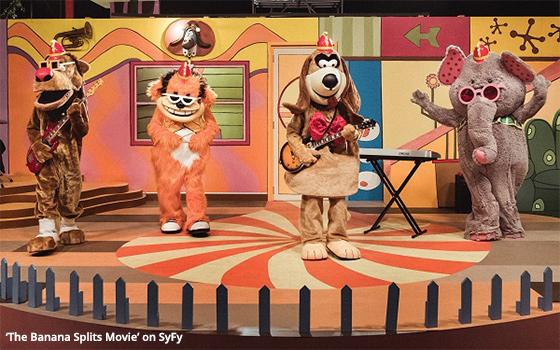 Urban legends that persisted for years about the supposed wartime heroics of Mister Rogers and Captain Kangaroo have long been debunked.

But now you can add a new legend to the pantheon of kiddie TV greats: The furry, bouncy foursome from 1970s TV known as “The Banana Splits” were -- and still are -- murderous robots.

The quartet of Fleegle, Bingo, Drooper and Snorky (pictured above) are seen in a new TV movie -- titled simply “The Banana Splits Movie” -- made for Syfy and premiering this weekend, complete with the original show's “Tra La La” theme song.

In the movie, the time period is the present day, and the Banana Splits are still staples of kids’ TV almost 50 years after they first appeared.

In real life, the show ended in 1982. But here, the Splits are still starring in new shows produced in studio facilities that have been their home base for decades on the Hollywood backlot of fictional Taft Productions.

But as the movie opens and a group of diehard fans -- both adults and children -- are attending a “Banana Splits” taping, the news circulates backstage that the show is over.

A new, brash head of programming for this fictional network has decided that “The Banana Splits” is too old-fashioned for the show to continue this long into the 21st century.

Besides, this new programming chief points out, cancelling the show will free up two valuable sound stages that can be put to better use making new shows that are more contemporary.

Unfortunately, the cancellation news does not sit well with the Splits, who turn out not to be actors in hairy suits, but mechanical robots. In the movie, they are revealed to be highly sophisticated robots whose software has been continually updated and tweaked over the years by a technician who works deep in the dark recesses of this studio backlot, largely unnoticed by the powers that be.

At least in part due to this technician's programming prowess, the Splits morph into robotic killers in response to the existential threat they face from cancellation.

And soon, anyone who crosses paths with them backstage can potentially become their victim -- including the network executive, the Splits’ human sidekick on the show (an all-purpose character named Steve), and various audience members who wander around the facility after the taping is over.

These portions may remind some of the “Willy Wonka & the Chocolate Factory” movies in which various children on a tour of Willy Wonka's factory were picked off one by one in successive calamities.

“The Banana Splits Movie” works as a hilarious send-up of TV kids' shows, and also pokes fun at our contemporary society in which childhood icons such as clowns or make-believe characters in furry costumes such as the Banana Splits are reimagined as malevolent fiends.

Proceed with caution, though -- “The Banana Splits Movie” is horrendously gory, and might not come across to everyone as particularly lighthearted. Dark-hearted is more like it.

As for Fred Rogers, he was dogged throughout his life by a story believed by many that he had been some kind of ruthless sniper in the United States military, possibly seeing action in Vietnam in the early 1960s. And, the rumors said, he wore his trademark cardigan sweaters on “Mister Rogers Neighborhood” to cover up tattoos etched up and down both arms. The story was false.

Meanwhile, the story about Captain Kangaroo -- actually, Bob Keeshan, the man who played him on the famed childrens' show -- had the young Keeshan serving in the United States Marine Corps in the Battle of Iwo Jima in World War II. According to this false tale, Keeshan saved the life of one Lee Marvin when the future movie star was in peril on Mount Suribachi on Iwo.

Furthermore, goes this story, Marvin was the one who first told this tale, in an appearance on Johnny Carson’s “Tonight Show” in the 1960s or ’70s. However, not one iota of the story is true. Research has revealed that Marvin never told such a story on the Carson show or anywhere else, and Keeshan did not serve on Iwo Jima.

The Banana Splits as murderous robots? Don't believe a word of it.