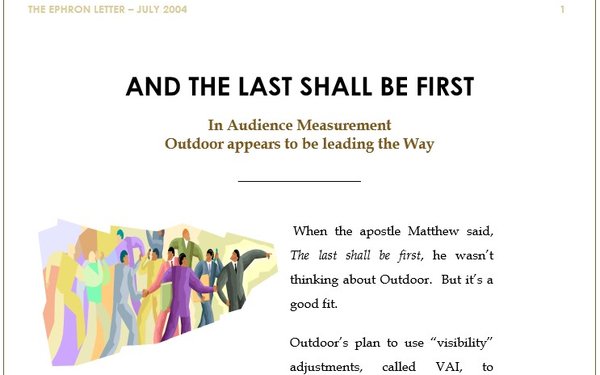 The advertising industry has spawned amazing visionaries, but it is hard to match the wisdom of the late, great Erwin Ephron.  He has been called “the father of modern media planning,” and “the inventor of ‘recency,’” and, as the anniversary of his death approaches, I’ve been thinking about how valuable his contributions to measurement have been.

With Ephron’s input, the industry made the leap forward from daily effective circulation (DECs, also known as “opportunity-to-see” impressions) to the likelihood-to-see impressions used today.

Pierre Bouvard, a fellow media researcher (now Chief Insights Officer at Cumulus Media, Westwood One), ran quite a number of studies on behalf of the out-of-home industry and shares my reverence for Ephron's vision. Bouvard generously shared an article that Ephron penned in July 2004, titled “And The Last Shall Be  First: In Audience Measurement, Outdoor appears to be leading the Way.”

Despite rapid technological innovation and disruption across the industry, Ephron’s words remain as true today as they were when he first wrote them 15 years ago.

Erwin stated: “Outdoor’s plan to use ‘visibility’ adjustments, called VAI, to measure the number of consumers who actually see a billboard, shames all of the other media exposure numbers we plan and buy with.”

Likelihood-to-see impressions aren’t just the gold standard globally. These metrics are vital as we embrace audience-based buying.  Utilizing opportunity-to-see impressions, an ad on the back of a bench may receive the same number of “impressions” as the billboard next to it -- despite it being more likely for passersby to see the billboard.

If you put this scenario into a blind, impression-based, programmatic platform, the bench will have a significantly lower CPM and typically be bought instead of the bulletin. Larger formats would be negatively impacted, while smaller formats artificially benefit.

Ephron believed embracing likelihood-to-see impressions makes it easier to buy and sell out-of-home advertising.  I agree. Prior to the introduction of the VAI, agencies and advertisers were discounting the opportunity-to-see (OTS) impressions based on their own proprietary evaluations of inventory factors such as size.

I recently spoke on a cross-platform measurement panel at the Advertising Research Foundation’s AUDIENCExSCIENCE conference, alongside media research leaders from across the industry. We discussed the gap between the opportunity to see an ad and actual consumption of that ad. I was happy to hear Ephron’s beliefs being espoused on stage and pleasantly surprised when the audience called for all channels to be measured as responsibly as OOH.

I continue to support the value of the likelihood-to-see impression and am deeply grateful to Ephron and my committee members who pushed for the use of this more valuable metric.

“Outdoor is, hands-down, the most exciting medium around.” — Erwin Ephron