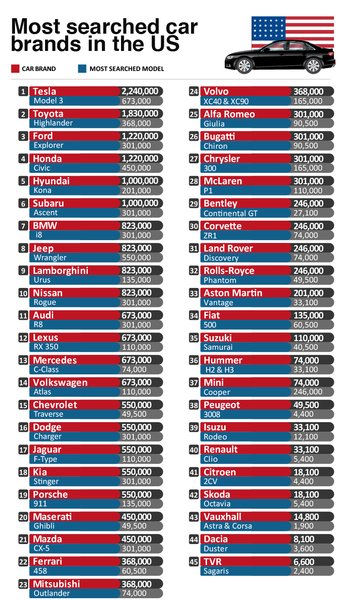 Tesla is the most-Googled car brand by Americans, with a record of more than 2,240,000 searches per month.

Tesla’s highest searched model is the Model 3 (673,000 searches a month), according to Click4Reg.co.uk, a personalized number plates company.

The electric car brand might be getting hits due to recent negative press, including a video that went viral of a driver asleep at the wheel, while his car navigated the freeway.

Consumer Reports published a review Tuesday that called the automaker’s Smart Summon feature “glitzy,” stating that it worked inconsistently, and questioning the benefits owners receive from it. Smart Summon allows a vehicle to drive to its owner in a parking lot or driveway.

Toyota is the next most popular car maker when it comes to searches, generating 1,830,000 online queries every month, the equivalent of 5,014 searches per day.

For Ford, the Explorer is the model gathering the greatest interest online, with 301,000 monthly searches.

The U.K.-based Click4reg derived search engine data from analytics tool SEM Rush to discover how often Americans search online for 45 recognizable car brands each month. The company also identified what was the most searched model for each manufacturer.

In the luxury sports car category, Lamborghini is the most-searched brand, with monthly searches totaling 823,000 (comparable to 2,255 searches each day).

On the other end of the table, independent British manufacturer TVR is the least sought-after car brand online by Americans, with only 6,600 Google searches per month.