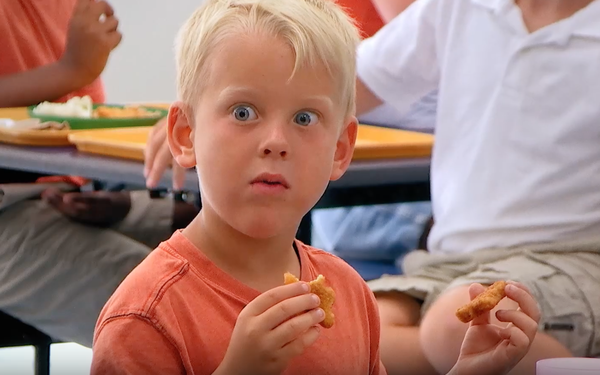 How does Perdue Farms hope to get kids to eat more vegetables? By hiding them inside its Chicken Plus nuggets, tenders and patties.

To support the Chicken Plus line, Perdue is rolling out a new national campaign with commercials filmed in an elementary school classroom in Los Angeles featuring non-actors and three members of the Perdue family.

Even though the campaign doesn’t focus on sustainability, it launches at the same time the National Chicken Council is urging its members to step up their efforts to educate consumers on the progress made in sustainable chicken production.

In a 15-second campaign spot for Chicken Plus, the schoolchildren are asked whether they like chicken nuggets. They all cheer as they are handed samples. After being informed that the nuggets contain vegetables, groans pour forth as one child exclaims “Sneaky!”

“With many brands entering the meatless, alternative or plant-based protein space right now, Perdue Chicken Plus is combining the chicken that kids already love with the vegetable nutrition they need,” CMO Eric Christianson said in a release.

Perdue introduced Chicken Plus in June of this year, noting that the products contain the equivalent of one quarter-cup of vegetables in a combination of cauliflower, chickpeas and plant protein. Perdue said the new line is aimed at “flexitarian” families who are “hungry for new ways to fill the vegetable void without sacrificing flavor or nutrition.”

Last week, the NCC said that producing the same amount of chicken today as in 1965 has 50% less impact on the environment, due to technology, modern breeding, nutrient management, feed conversion and improved animal husbandry practices.

“As sustainability in agriculture continues to be a hot topic among U.S. shoppers, we as an industry need to do a better job of telling our sustainability story, because it’s a great one,” NCC President Mike Brown said in a statement.

Concurrent with the statement, the organization made available to its members educational videos, infographics, farmer testimonials and other material to “answer questions and address misperceptions.”

In an NCC survey fielded in January of 2019, 49% of respondents “indicated a willingness to eat more chicken if they learned it is more sustainable than other protein sources.”