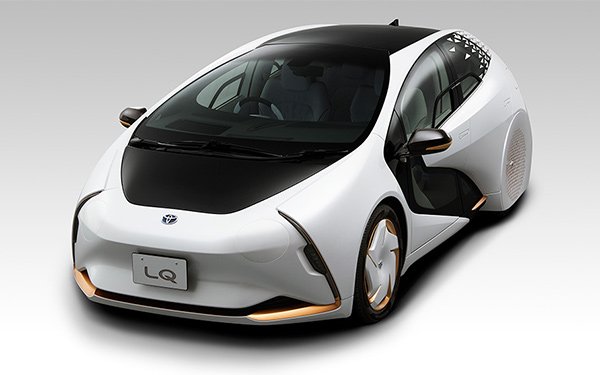 Toyota is introducing its the car of the future, including automated driving capabilities and artificial intelligence that learns from the driver.

The “LQ” concept car, the next generation of the Toyota “Concept-i” first shown at the 2017 CES, “leverages advanced technology to build an emotional bond between car and driver,” says Toyota.

The car includes automated driving capabilities and an AI interactive agent called “Yui,” which along with the LQ was developed in partnership with Toyota Research Institute.

The roof and floor mat areas are used as a communications platform to share information between the vehicle and passengers with embedded lighting displays showing different colors and lighting different foot wells to indicate which passenger Yui is addressing.

The headlight system can activate1 million tiny embedded mirrors to project complex figures on the road ahead to communicate to the driver information such as road surface conditions.

No word on when an actual commercial version of the vehicle might become available -- and if so, what it might cost
automotive, iot
1 comment about "Toyota Intros AI-Powered Concept Car".
Check to receive email when comments are posted.
Next story loading