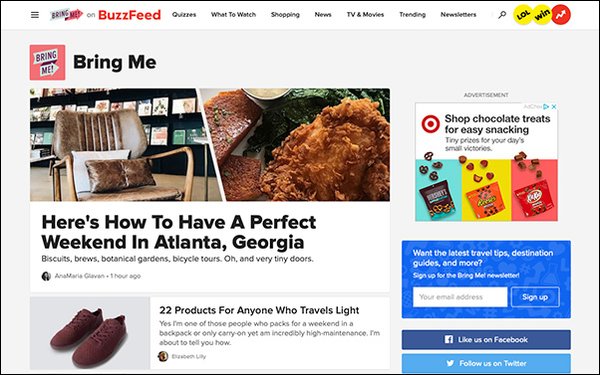 BuzzFeed has launched a creators program for its travel and experience brand Bring Me! Five creators will collaborate with Bring Me! to produce original series, longer-form content and information in other formats to draw audiences and brands to the vertical.

Creators tapped to join the program include American professional BMX athlete-filmmaker Nigel Sylvester, known for his adventure travel video series “GO,” where he tours famous cities from a first-hand POV on his bike.

The other Bring Me! creators are Greg and Rebecca Remmey, the couple behind the Instagram account DevourPower, and Bring Me!’s own Jasmine Pak, known for her popular show “Giant Food Time,” which drew 20 million views in its first season, and Lizz Warner, one of the first Bring Me! producers.

“Offering a portfolio of meaningful talent can unlock more audiences from their influencer networks, and brands can get a lot more,” Rich Reid, BuzzFeed’s vice president of global content and general manager of Bring Me!, told Publishers Daily.

Longer form, narrative-driven Bring Me! content was attracting more eyeballs, engagement and conversations, Reid added, so it was a “natural evolution” to “put the very best creators and on-screen talent in that content.”

BuzzFeed’s creators programs tap influencers and other notable content creators to help co-produce content and amplify branded campaigns. These influencers come with an engaged following that can become extensions of BuzzFeed’s brands.

BuzzFeed’s popular recipe and cooking brand Tasty launched its own creator program last summer. It now has six creators, including celebrity chef Marcus Samuelsson, who serves as the brand's executive chef in residence.

Bring Me! has become one of the largest and fastest-growing travel publishers among Gen Z since its launch in early 2017, with more than 3 billion video views and an average of 4 million views per video, according to Tubular Labs.

“This brand came from two main stats,” Reid said. “70% of millennials would rather spend money on travel than on products, and 83% are enticed by unique experiences and destinations around the world.”

That means it resonates more with audiences to spotlight unique underground bars in Paris than to produce articles and video on the 10 best places to eat in the city. Reid said Bring Me!’s growth is due to this focus on specific locations and creating snackable videos, like a spot in Chicago that makes super-sized pizza.

The brand has also expanded to create itineraries and food tours, as well as personalizing content for “certain identities,” Reid said, like travel recommendations for self-identifying introverts.

That has also led Bring Me!’s audience to use its content not just as inspiration, but to consider visiting certain establishments or traveling to those destinations, Reid said. This is attractive to brands, he added. Some 50% Bring Me!’s commercial partnerships come from the U.S. and the other half from international brands, across sales verticals like finance, CPG and auto.

Bring Me! launched new language editions in Portuguese and Spanish this year. The brand plans to expand into another language by the end of 2019, Reid said.

From October 2018 to March 2019, Bring Me! partnered with tourism agencies London & Partners and The Paris Convention & Visitor Bureau to create a campaign to entice Americans to visit both cities in a single trip.

The video campaign took viewers from breakfast in Paris to lunch in London. It resulted in over 2 million Facebook impressions and 1.1 million video views.

A BuzzFeed study found one in three respondents confirmed they planned to book a trip to Paris and London.