What To Wear In Orbit: Under Armour Reveals Virgin Galactic Space Togs 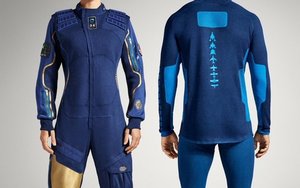 Anyone wondering what to wear for that first trip to outer space can stop thinking about borrowing a look from Spock, Will Robinson or Barbarella.

Under Armour, which announced a partnership with Virgin Galactic earlier this year, has just taken the wraps off its new space gear. The company calls the space duds “safe, functional and comfortable," with "its own twist on classic spacesuits and footwear to mold the way the next generation of space travelers will dress.”

The line includes a base layer that the Baltimore, Maryland-based company says acts as a second skin, “enhancing performance and blood flow during the high and zero-G portions of flight.” Constructed from the company’s new Intelliknit fabric, it’s designed for both moisture wicking and temperature management.

Next, astronauts can climb into the blue spacesuit, partially made from a proprietary material called UA Clone, providing a precision fit, with extra cushioning built into shoulder pads and neck areas, providing more protection during the high G portions of flight.

A jacket includes many functional features such as pockets and a built-in communication device with a push-to-talk button. It also sports a clear pocket inside of the jacket, above the heart, so future astronauts can insert a photo of a loved one.

And forget about those bulky moonboots. Under Armour’s footwear is a sleek boot with no distractions, meant to be especially comfy while floating in zero gravity. In a nod to Sir Isaac Newton, "We Stand on the Shoulders of Giants" is printed on the sockliner.

While Under Armour introduced the gear as space wear “for the masses,” Virgin Galactic flights are anything but. Tickets are likely to cost $250,000 per person, with flights expected to begin next year.

It’s good that Under Armour is exploring the next frontier, because its earthbound business is still challenging. The company is fighting its way through a painful transformation. In its most recent quarterly results, revenues rose 1% to $1.2 billion, but sales in North America fell 3% to $816 million. Apparel sales slipped 1% to $740 million.