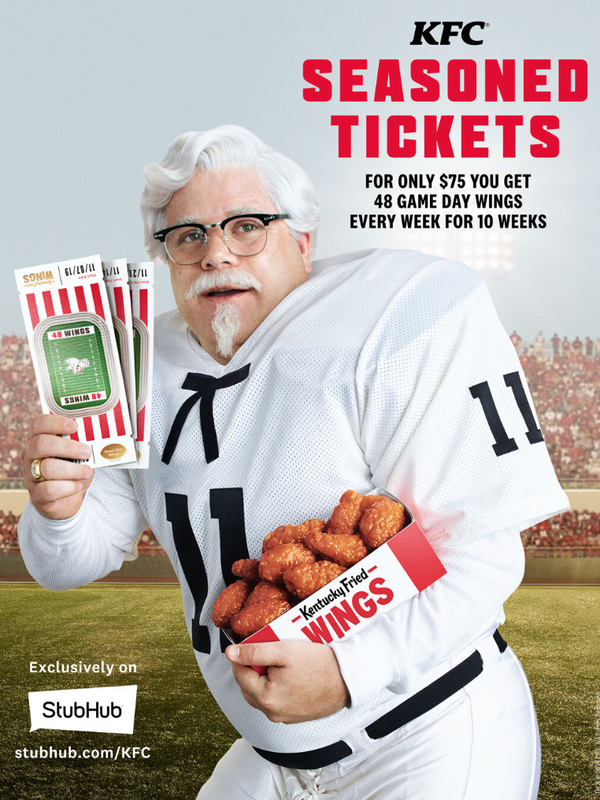 KFC’s Seasoned Tickets sold out today on StubHub in under two hours.

The fast-food restaurant partnered with StubHub on a promotion that allowed fans to sign up for Kentucky Fried Wings delivery or pickup. The tickets, which will smell like fried chicken when they arrive in the mail, went on sale at 8 a.m. EST, with the final ticket selling at 9:52 a.m. EST on the dedicated Stubhub microsite.

One of the consumers who nabbed the tickets has already listed them on eBay for $749.

For $75 per package, the KFC Seasoned Ticket holders will receive weekly offers so they can get 48 made-to-order Kentucky Fried Wings delivered to their doorstep (or restaurant pickup) every week for 10 weeks.

The promotion, created by Wieden+Kennedy Portland, is timed to coincide with the NFL season and is geared toward sports fans.

On week 10, ticket holders will receive a Double Wing Bonus ticket for an additional order of 48 wings. That’s 528 wings in total, valued at more than $400 per Seasoned Tickets package.

While the Seasoned Tickets are sold out, for future firsthand access to KFC news, deals and promos, consumers can sign up for KFC’s Colonel’s Club email.

“We’re always looking for ways to give fans an enhanced and unique game-day experience,” says Olivier Ropars, CMO, StubHub, in a release.