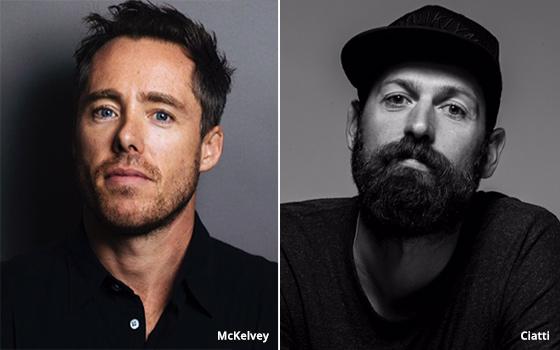 Ciatti is launching Alto which will remain in JXH's offices in New York City with most of the seven-person team remaining on staff. JXH client Montefiore Health Systems will continue to work with Ciatti's new agency.

"Today we’re hanging a new banner, Alto, and except for the name change and some paperwork it’s pretty much business as usual," quips Ciatti. "In Italian, alto means ‘to stand tall,'" he explains. "That spirit is innate to who we are as a group, and it’s already translating into incredible work for the new year.” He adds, “We believe that our clients’ money should go to thinking creativity and execution - not overhead.”

Meanwhile McKelvey is starting his own new agency—The Mirimar Group--in Los Angeles. The Mirimar Group will be structured similarly to JXH, with his leadership team expected to be announced in the coming weeks. The agency will operate hubs in both NYC and LA, with the latter selected due to Mirimar's intended focus on the entertainment/content side of the industry. Mirimar will tap into McKelvey's network of contacts on a per project basis and he will also continue to work with many clients from JXH.

"Mirimar's approach gives us the freedom to partner with the world's best people for each unique opportunity," says McKelvey. "Being part of a culture is not easy for traditional agencies to do. Their structures, along with having the same talent for every client, makes it nearly impossible to have the right teams for different projects and brands."

JXH — which was founded in 2016 — was a highly awarded and acclaimed agency,  working with a number of the top global brands including Apple Beats by Dre, Nike, Squarespace, Google, and Expensify.

In three years, the shop won a number of awards for both its creativity and effectiveness, including an Emmy, the Cannes Grand Prix, and Webby awards. It was named the third top worldwide independent agency at the Cannes Lions in 2019.

The end of an award-winning agency is a sad day for the industry, but it enables two well-regarded creative talents to expand their visions to reach more clients. AdLand as a whole wins with the launch of two new agencies.

Although the two founders are still working on winding down JXH, both express only positive wishes for their partner. "We had a great run, with a lot of great work," says McKelvey. "Although we're going forward independently, I'm excited for this next chapter of life and Hannes' future success."