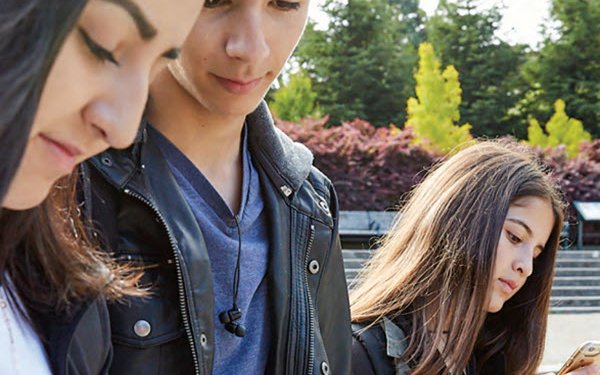 Online video viewing is “going through the roof” among young people, while time spent watching television on TV sets is declining, confirms a new study from nonprofit Common Sense Media.

Since the organization’s last media-consumption survey among tweens and teens in 2015, the percentages of those reporting that they watch online video every day has more than doubled among both groups.

Common Sense surveyed more than 1,600 U.S. eight- to 18-year-olds in detail about how they consume media, including video, social, mobile games and traditional media including TV, radio and books.

Further, the average video consumption time per day has also doubled among both groups, from about a half hour to an hour. Tweens now average 25 to 56 minutes per day, and teens 35 to 59 minutes per day.

Meanwhile, the percentages saying they enjoy watching TV “a lot” have dropped from 61% to 50% among tweens and from 45% to 33% among teens.

And both groups report watching about a half hour less of TV on a TV set today than four years ago: 25 minutes less per day among tweens, and 24 minutes less among teens.

Even among shows watched on a television set, most viewing is now time-shifted. 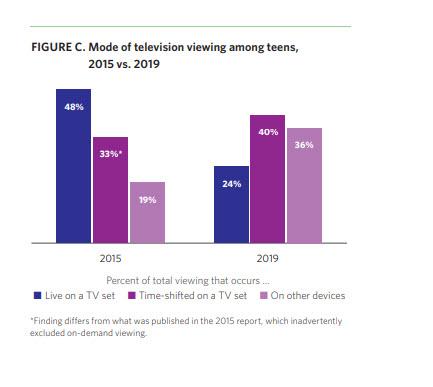 Interestingly, time spent on social media has remained steady (down one minute versus 2015 to an hour and 10 minutes per day).

Both African American and Hispanic/latino teens spend more time using social media than their white peers do (among those who use it, Hispanics/latinos devote an average of 2:23 a day, blacks 2:15, and whites 1:35).

Looking at the bigger picture, on average, teens consume a total of seven hours and 22 minutes of screen media entertainment (homework time excluded) per day, and tweens consume four hours and 44 minutes’ worth.

Among tweens, the total amount of screen media time has been relatively steady, rising by eight minutes since 2015. Among teens, the total screen time has increased by 42 minutes per day from the six hours 40 minutes found in 2015, although this change is not statistically significant.

Nearly two-thirds (62%) of teens use more than four hours’ worth of screen media per day, including nearly three in 10 (29%) who use more than eight hours.

Young people from lower-income households spend an hour and 50 minutes more time per day on screen entertainment, on average, than those from higher-income families: five hours 49 minutes versus three hours 59 minutes.

“We can’t say from the data in this report why this disparity occurs, or whether it has any effect on young people, either positive or negative. But we can affirm that this disparity does exist, and is fairly substantial,” write the researchers.

The study also found that despite claims to the contrary by tech companies, young people spend very little time creating their own content on screens.

“Screen media use continues to be dominated by watching TV and videos, playing games, and using social media; use of digital devices for reading, writing, video chatting, or creating content remains minimal,” sums up the report.

Total average media time per day, including non-screen media activities such as reading books and listening to music, is five hours 54 minutes for tweens and nine hours 49 minutes for teens.

The research confirms that reading has taken a beating in the competition with screen time.

Fully 32% of teens say they read for pleasure less than once a month, if at all.

Further, “young people’s enjoyment of reading and their likelihood of doing it for their own pleasure drop substantially as they age: 38% of tweens enjoy reading ‘a lot,’ compared to 24% of teens, and 35% of tweens are daily readers, compared to 22% of teens.”

The report can be downloaded free with registration.

The survey was conducted online among a nationally representative, probability-based sample of 1,677 U.S. young people age 8 to 18 years old, using the Ipsos KnowledgePanel. African American respondents were oversampled to ensure a total sample size of 250 respondents. KnowledgePanel members are recruited using probability-based methods such as address-based sampling and random-digit-dial telephone calls. Respondents received a cash equivalent of $5 for their participation; African American respondents received an additional $5 equivalent to improve response rates among this lower-incidence demographic group. See report for more on methodology.