TV's Christmas Season Does Not Start Until Hallmark Says So 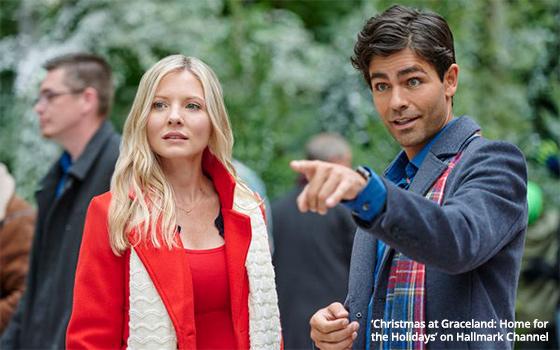 Although it was not yet Halloween, Hallmark Channel got the holiday ball rolling with the kickoff of its “10th Anniversary Countdown to Christmas.”

“Countdown to Christmas” is the name Hallmark gives its annual lineup of made-for-TV holiday movies -- premiering new ones in prime time every weekend from October through New Year's and, at almost every other time of day, airing the dozens of holiday movies the network has stockpiled over the past decade.

Has it really only been a decade that Hallmark has done this? This year-end string of snowy, cheerful, Christmas-y romance movies plays as if it has been with us all our lives. And yet, it has taken only 10 years, apparently, for Hallmark Channel to establish itself as TV's governing body when it comes to establishing the official start of the holiday season on television.

Or to put it another way, TV's holiday season does not begin without Hallmark’s say-so. Last weekend, the kickoff of the Hallmark holidays began with its first new movie of the season titled “Christmas Wishes & Mistletoe Kisses.” For that title alone, Hallmark deserves special recognition.

The movie was about an interior decorator who faced a short deadline in redesigning the interior of a wealthy man's mansion in time for Christmas. And wouldn't you know it? She develops “feelings” for this man and, it turns out, the feelings are mutual.

Certainly, to the millions who flock to Hallmark for these feel-good TV movies -- at Christmastime and other seasons throughout the year -- the romance at the heart of “Christmas Wishes & Mistletoe Kisses” was predictable, since the basic outline of most (if not all) of these movies is more or less the same.

However, though they are “as corny as Kansas in August” (to borrow a line from a famous song), the arrival of these movies at this time of year is as welcome and traditional as the Christmas tree stands that suddenly appear on the sidewalks of Manhattan on the day after Thanksgiving.

You know what else is predictable? That these movies will do well for Hallmark. Right out of the starting gate, “Christmas Wishes & Mistletoe Kisses” scored a “2.7 Household rating, 2.6 million Total Viewers, 414,000 Women 25-54, and 328,000 Women 18-49, [and] ranked as the highest-rated and most-watched program of the day” (on Saturday, Oct. 26), Hallmark said in a press release this week.

The movie “propelled Hallmark Channel to rank as the highest-rated and most-watched non-news cable network throughout the weekend among Households, Women 25-54 [and] Total Viewers,” Hallmark said, citing Nielsen numbers and adding that the movie “reached over 3.8 million unduplicated Total Viewers.”

This year, the Hallmark Channel press site lists at least 24 new holiday movies to be seen this season.

Eighteen of them have the word “Christmas” in their titles, including “Christmas Scavenger Hunt” (coming this Sunday), “Picture a Perfect Christmas,” “Christmas In Rome,” “Christmas Town” and “Christmas At Graceland: Home for the Holidays,” starring Adrian Grenier (pictured above). Yes, he was the star of “Entourage” on HBO.

There is even a combination Christmas and Hanukkah movie set to premiere Sunday, Dec. 22, which happens to be the first night of the eight-day Jewish Festival of Lights.

With Hanukkah actually coinciding with Christmas this year, Hallmark presents this movie, “Double Holiday,” in which a woman who is evidently Jewish is challenged to find the time to celebrate Hanukkah with her family while at the same time, planning her office Christmas party.

Oy vey! This one should be a holiday classic.