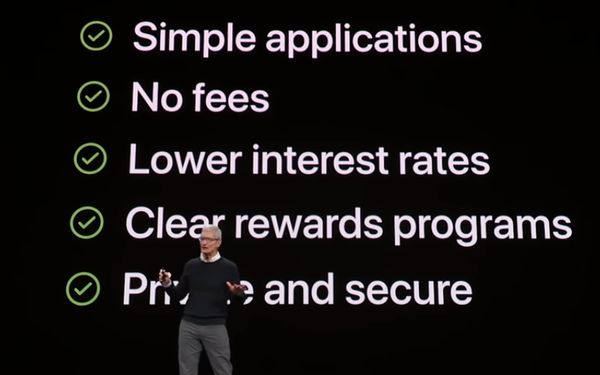 On Wednesday, Apple CEO Tim Cook said users of the new Apple Card will have 0% iPhone financing for two years.

That might turn out to be an attractive proposition to Apple devotees who would like to upgrade to the newest iPhone but don’t want the sting of paying for it. Usually, that has meant financing their new iPhone through their wireless carrier.

Making the announcement as Apple reported fourth quarter earnings, Cook’s sales pitch said consumers who take up the offer “will continue to enjoy all the benefits of Apple Card, including 3% cash back on the total cost of their iPhone with absolutely no fees and the ability to simply manage their payments right in the Apple Wallet app on iPhone.”

The 0% feature is similar to the existing iPhone Upgrade Program, but a lot more flexible. A user can pay whenever he or she has the coin to do it, as long as the phone is paid off in two years.

Some tech observers saw the 0% program as a disguised beginning of something like Amazon’s Prime subscription, giving consumers with the Apple Card discounted or special deals on a wider array of Apple products.

“We are cognizant that there are lots of users out there that want a recurring payment like that and the receipt of new products on some standard kind of basis, and we are committed to make that easier to do than perhaps it is today,” Cook said, according to Geekwire.

Inducing consumers to upgrade their smartphone has become more of a challenge, as consumers don’t see enough new features to justify upgrading the way they once did. Even before the 0% offer, Apple was aggressively peddling trade-in deals to get consumers to stay involved.

Apple reports that its new iPhone 11 is now its best-seller, but even so, its iPhone Q4 revenue was down 9%  year to year. That doesn’t sound so great, but it’s far better than the much larger year-over-year declines in the previous quarters in this fiscal year.