On TLC Show, Nine Kids Grow Up Without Media Access 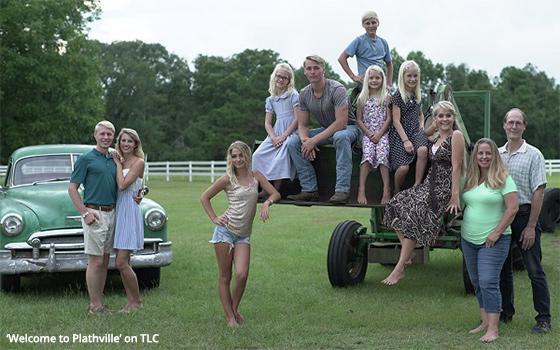 What's it like to be a kid growing up in America today with no TV, no cell phone and no internet?

The answer to this question would seem to be elusive since it would appear as if every kid in America has access to all of those things, for better or worse. Where would one find such a child in the first place?

One place would be the new reality series “Welcome to Plathville,” premiering Tuesday night on TLC. In the one-hour episode -- the first of six -- you will meet the 11-member Plath family headed by Dad Barry and Mom Kim who live with their brood on a farm outside of Moultrie, Ga. (located about 60 miles due north of Tallahassee, Fla.).

On their farm, the Plath kids -- ranging in age from 6 to 21 -- live a life of swimmin’ in a pond, runnin’ around in bare feet, climbin’ trees and otherwise enjoyin’ all the fun of childhood in a world without gadgets or access to outside media.

They seem like a nice family, but as the one-hour show proceeds, it is difficult to understand how these children will be prepared for adulthood in a world in which internet access -- via phone, tablet or laptop -- is necessary now (and will be even more so in the future) for so many everyday activities, including work, financial transactions and social interactions.

In addition, it is worth asking how long the Plath parents can realistically prevent the outside world -- represented mainly by media they find unwholesome and ultimately destructive -- from intruding on their isolated lives.

At one point, Mom Kim describes the kids’ internet access as “limited,” which has apparently kept them from discovering the world of sports and music celebrities. Since all of the kids are home-schooled, it is possible that this limited computer time has something to do with that.

They are certainly not using computers or any other gadgets to play video games. Indeed, they have never played them. Their parents forbid them from drinking Coke or consuming processed sugar of any kind. The family sweetener is honey only.

One of the boys, good-natured Micah, 18, is OK with all that. “I've grown up without a TV [and] I don't think I need one,” he says with a smile between chores on the farm which he seems to love doing.

As one who has watched TV for my entire life -- and made my living from it too -- I came to the same conclusion some time ago. Right you are, Micah: We might tell ourselves we “want” TV, but no one actually “needs” TV.

On one level, the lack of gadget-based leisure activities has at least made the Plath children healthy and active; they are certainly not sedentary children.

Two of the kids might serve as representatives of two ends of the spectrum. Moriah, 17, is eager to participate in the teen culture that she has only heard about, but has not experienced. Her mother wants to keep her down on the farm, but the lure of the outside world might prove stronger than her apron strings in keeping Moriah reined in.

Then there is 21-year-old Ethan, who is newly married. With the encouragement of his wife, Olivia, he is seen with a wide grin sampling everything he was once denied -- from Cokes to margaritas. He is so wide-eyed and naïve that he emerges as a real-life Gomer Pyle. But ultimately, unlike Moriah, Ethan seems content to live close to home.

If there is a lesson to be learned from this exercise, it is probably that completely denying kids access to outside media might actually benefit them for a portion of their childhoods. But at some point, they are probably going to have to reckon with the world outside their farm.