When Disney Acts Like Disney, TV Becomes A Magic Kingdom 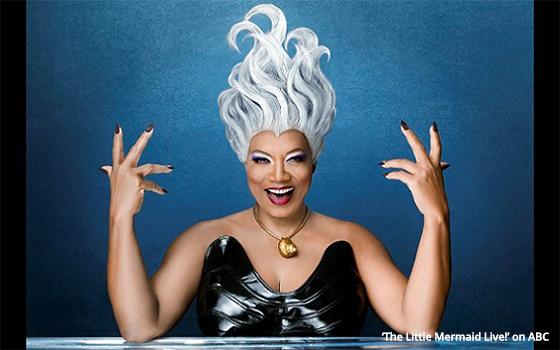 Maybe it is because of the launch later this month of Disney+ that The Walt Disney Company, which has long insinuated itself in all of our lives, seems more omnipresent than usual these days.

Two weeks ago, the TV Blog felt honor-bound to point out that an entire two-hour episode of “Dancing With the Stars” on a Monday night on ABC was devoted to promoting all things Disney -- especially the Disney+ subscription streaming service scheduled to launch next week (on Tuesday, Nov. 12).

Cut to this week and ABC is putting on a prime-time event that you might say represents the Disney brand right to the core.

As far as can be determined from descriptions provided in the press material put out by ABC, it is a live “hybrid” presentation of the original “Little Mermaid” animated movie, but with live-action performances of some of the film’s (and the subsequent stage musical's) iconic songs.

These will be performed by, among others, Queen Latifah (seen in the photo above) and the singer known as Shaggy.

The entire two-hour show has a lengthy title, featuring the kind of awkward construction that seems only to happen in show business. It is called “The Wonderful World of Disney Presents The Little Mermaid Live!"

This long title is divided into two world-renowned brands. The first one is “The Wonderful World of Disney,” which has been around off and on, and in some way or another, since 1954 when it was the name of a TV series hosted by Walt Disney. Thus, this “Little Mermaid” hybrid has roots going back at least to 1954.

The other brand is “The Little Mermaid” itself, which is now entertaining its second or third generation. As it happens, the original movie was released 30 years ago next week (on Nov. 13, 1989).

Disney has this way of keeping its beloved brands alive like no other entertainment company. You can start with Mickey Mouse and work your way up from there. The character has been around since 1928 and today is likely known to almost every man, woman and child alive on the planet Earth (except maybe in North Korea).

One can assume that dozens, if not hundreds, of cartoon characters have been introduced to the world ever since -- including a number that were probably also popular in 1928. Comparatively few are known today.

And what other company on the planet as big as Disney still goes by the founder’s name? Walt Disney was evidently a force of nature. He died at the relatively young age of 65 in December 1966, more than half a century ago.

But you almost expect him to show up on TV Tuesday night to happily introduce this newly assembled presentation of “The Little Mermaid.”

Whether or not this hybrid “Mermaid” will draw huge audiences remains to be seen. But this week, almost on the eve of Disney's swan dive into the wonderful world of subscription streaming -- a business that Disney might just come to dominate in a few short years -- it feels as if Disney is seeking to reclaim its birthright as the world's premiere source for family entertainment.

Over the years, Disney has come to own “Star Wars,” the Marvel Universe, “The Simpsons” and scores of other world-renowned entertainment brands. But the family-oriented brands it originated itself -- from Mickey Mouse and “Snow White” to “Aladdin” and “The Little Mermaid” -- are still its strongest properties.

They are likely also to be among the primary drivers of subscriptions to Disney+ because when you stop and think about it, you would be hard pressed to find a household with children over the last 30 years that did not possess the full DVD (or VHS) library of Disney classics.

And now, what family won't subscribe to Disney+ for the exact same reason?

“The Wonderful World of Disney Presents The Little Mermaid Live!” airs from 8 p.m. to 10 p.m. Eastern Tuesday on ABC.