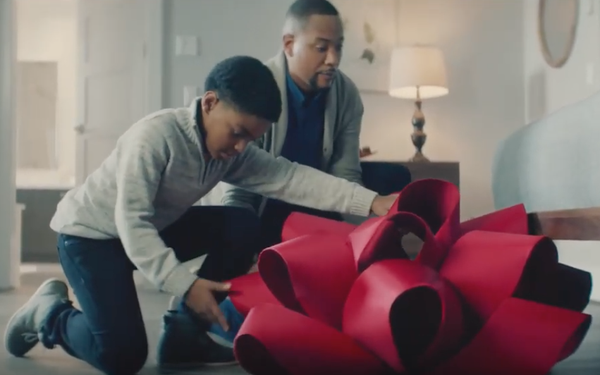 Halloween is behind us and the radio stations have started playing Christmas music. So it’s time for automakers to start urging consumers to give the ultimate gift.

According to CarGurus, 30% of respondents had received a car as a gift -- and of those, 4% said it was for Christmas or Hanukkah.

Hoping to capitalize on that trend, Lexus is bringing back its “December to Remember” campaign, complete with giant red bows, for its 20th year. The work was created by Team One.

“We have seen sales events like the ‘December to Remember’ pull forward every year,” George Augustaitis, CarGurus director of industry analytics tells DriveTime. “This is certainly imperative for this year with the tighter timeline between Thanksgiving and Christmas.”

Most year-end ad campaigns tend to focus primarily on sales and pricing and feature a lot of cars and loud graphics. But Lexus changed all that, seeking to connect with consumers emotionally, and focus on the holiday season versus year-end sales messaging

"It isn't as common as the commercials might have you think, but it does happen; parents buy a car for their newly licensed teen or a person buying one for their significant other,” says Ronald Montoya, senior consumer advice editor, Edmunds. “December is a great time to buy a car because the discounts off MSRP are the largest all year. Dealers are motivated to sell their outgoing models to make room for the next model year and to make year-end sales goals.”

“Where other manufacturers were focused on sales transactions -- ‘moving sheet metal’ –--Lexus focused on the holidays and the joyful, human moments that create special memories,” Materazzo says. “Perhaps ironically, it was that focus on the consumer that ultimately led to sales leadership over competitors.”

“The automakers and their dealers want to close the year out on a high note,” Krebs tells DriveTime. “This year, in particular, we will see huge promotions. Retail sales have slowed this year, and there is a lot of leftover inventory from the past model year as the 2020 models are gearing up.”

Lexus’ campaign features three different families in unique spots. The first two center around the iconic red bow itself, with a father and son’s playful banter as they team up to carry the big red bow as if it were a piece of furniture, with the bow falling from closets, and too big for the garage freezer. Meanwhile, a mother and daughter sneak around behind dad’s back, attempt to stuff the bow behind curtains and under cupboards, and even hide the bow in plain sight in the rafters over the dining room table.

The third spot focuses on hiding the car itself. In it, a father and son are constantly on guard, hiding a shiny bow-topped Lexus NX crossover in the neighbor’s garage, under a snowbank, and obscuring Mom’s view with a pile of gift-wrapped boxes.

At the end of each spot, after the gift-giving moment, the givers exchange a look of relief, underscoring that their efforts have paid off, and the experiences and emotions were shared.

If you are ready to become a generous gift-giver, Edmunds’ Ronald Montoya has some advice.

“If this is something you're considering, make sure to check out the local laws with regard to the buying paperwork,” he says. “In some states, you cannot buy a car in someone else's name, or if you want a shared title, the other person must be there to sign the paperwork. That would obviously ruin the surprise. And by the way, the bows you see on TV aren't usually included, so you'll have to get one made.”

Actually, that's not true, at least not when it comes to Lexus, according to the automaker.

"[Montyoya] might be referring to other brands that have a similar gifting strategy, but at Lexus, the red bows are part of the final product in your driveway," a spokesperson tells DriveTime. "In fact, Lexus dealers are all given bows (and some purchase more) for the sales event. Some dealers provide them free of charge, while others request a deposit or fee to use the bow. Either way, the signature red bows are indeed part of the overall process during the 'December to Remember' sales event."