Late-Night Hosts Are Too Old For Childish Game-Playing 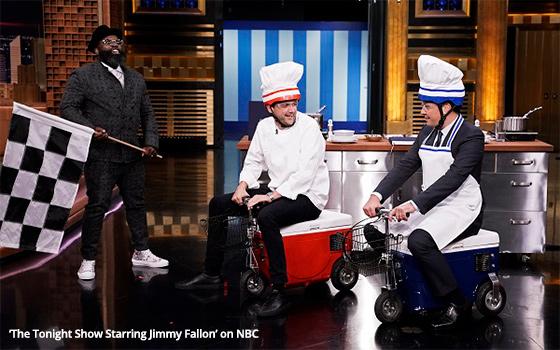 On his most recent podcast, Conan O’Brien, 56, was heard taking part in a taste test of Gerber baby foods with members of his staff.

This symbolizes all you need to know about most of our current roster of late-night TV hosts and the state of late-night television -- if not our entire society in general, where immaturity is the norm and acting like a grown-up is a behavior choice that even has a name -- “adulting.”

For the record, this baby food taste test took place at the tail end of the 44th episode of O’Brien's podcast series titled “Conan O'Brien Needs a Friend,” most of which was taken up with an interview with Neil Young.

With a guest of this caliber, it is a mystery why O’Brien felt he had to fill time taste-testing baby food when he could have just conducted a longer interview.

It should go without saying, but there was a time not that long ago when a 56-year-old TV personality would have said no to eating baby food as a means of entertaining audiences who were also adults, or so it was assumed.

Today, however, the definition of an adult in our society is fluid, to say the least. Not too long ago, it was a pretty cut-and-dried concept -- legal adulthood for various rights and privileges was 18 or 21, depending on the location. Or more typically, kids would graduate from college and then go out on their own to find jobs and rent cheap apartments.

Now, young people well into their 20s, if not older, regard the act of undertaking grown-up activities as something one does under duress, as if continuing a kind of lengthy childhood by playing games and dressing up in costumes is preferable to job, home and family responsibilities.

This mindset appears to be what the late-night shows seem to be responding to with their mindless game-playing.

Conan O'Brien's Gerber baby food taste-test notwithstanding, the late-night host who is the most afflicted with Peter Pan syndrome is Jimmy Fallon, 45, who only appears comfortable on his show when he is in the act of playing hyperactive games.

In the photo above from a recent show, he is perched atop an ice chest with wheels for some kind of race with a guest who happens to be a chef. Why anyone would want to watch a hyperactive man-child cavort in this way in the middle of the night before bedtime is a question to which I have no answer.

Suffice it to say, Fallon and his hijinks have made “The Tonight Show” -- which was once the pearl of NBC, late-night TV and to a great extent, TV in general -- into a second-rate also-ran in the late-night wars. He is the first host of this revered show to accomplish this.

When accidentally encountering him on the way to something else to watch, he is frequently engaged in these games with his guests, leading me to wonder why they agree to participate in these segments in the first place.

Can't they just say no? And if “The Tonight Show” won't take no for an answer, why not just pass on “The Tonight Show”? Appearing on late-night shows today does not have nearly the publicity power that it used to. So what's the point?

One theory: Somehow, celebrity publicists seem to have formed the impression that the stars must participate in these dumbed-down and unflattering situations in order to come across as relatable, in order to draw attention and expand their fanbases. This happens to be nonsense.

Like so much else on TV that is supposedly aimed at younger audiences, the constant, childish game-playing on the late-night shows is an insult to this very audience.

While Fallon's game-playing might appeal to some who persist in living in their parents' basements until they are 30, some young people who are not just playing as adults evidently appreciate something smarter, which is likely why Stephen Colbert's “Late Show” on CBS is now the frontrunner in a time period in which NBC once had no peer.

The point is that, increasingly, the late-night hosts as a group are all well into adulthood. And so are their audiences. But the hosts seem resistant to growing up.

News flash: Plenty of comedy can be found in the lives and concerns of actual adults. Most adults, at least those who have moved out of their parents' basements, are not playing games like children either. Instead, they are having them.

It is high time for the baby-food eaters of late-night TV to grow up.