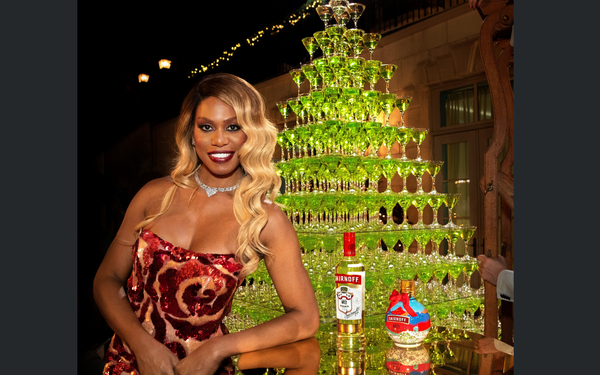 Smirnoff Vodka will celebrate the holiday season with “Orange Is The New Black” star Laverne Cox fronting ads in which she’s hosting a lavish party awash with vodka cocktails.

The “Cheers to a Not-So-Silent Night” ad  has a kind of big-band-era elegance, with women in formal gowns and men in tuxedos. Cox strolls down a hallway and tears away her tux to reveal a slinky outfit underneath.

The ad began showing  up on TV  and digital platforms this week, and an outdoor advertising campaign is also in the works.

The lead agency was 72&Sunny. The background music is the 1952 song “Oops” performed by Louis Armstrong and Ella Fitzgerald.

Smirnoff is the world’s best-selling vodka, with all the benefits and detriments of being a legacy brand.

It is sometimes called a bar brand for drinkers not choosing a specific label. “At Smirnoff, we continuously pride ourselves on being a brand built on inclusivity, affordability and accessibility, all while offering consumers high-quality products that taste great for any occasion,” said  Krista Kiisk, the brand director, when Marketing Daily asked if it’s trying to take itself more upscale.

“While the holiday party scene is a bit elevated, our products come to life in fun and unpretentious ways, which is aligned with our brand and isn’t new positioning,” she added.

Just a month ago, Smirnoff kicked off a global campaign, its first in 25 years, called “Infamous Since 1864” that depicts a cloak-and-dagger history for the vodka,  with scenes that look straight out of “Casablanca.” (In fact,  Russian founder Piotr Arseneevich Smirnov’s vodka was a favorite of tsars, but the Bolshevik Revolution closed the business. Son Vladimir fled to France where the vodka became “Smirnoff.” Today, Smirnoff is made in the United States.)

In  2018, Cox was joined by actors Ted Danson and Jenna Fishcher, and  “Queer Eye” grooming expert  Jonathan Van Ness, for the Smirnoff campaign,  “Welcome to the Fun %,” a diversity-themed pitch.

This time, (except for a cameo from social media star Toddy Smith) Cox is the only star of the commercial. On top of another batch of Smirnoff’s “Welcome Home” campaign to mark Pride Month earlier this year, she almost seems to be the face of the brand.

“We consider her an integral part of our brand family,” Kriisk said, "which as a collective provides us a unique opportunity to stay relevant with a broad and diverse audience during key cultural moments.”

Vodka is a popular drink of choice for the LGBT segment of the population, but it’s also an extremely popular drink with everybody. Vinepair, which claims it's the largest digital media company with “content about drinks and experiences you have with a glass in your hand,” notes that vodka is in one of three hard liquor drinks ordered in bars.

And some brands stand out with LGBT drinkers. Absolut has a year-round rainbow bottle and has donated more than  $40 million to gay and lesbian health centers. Smirnoff has been noticeable to this group for a long time, too. In 2018, its “Love Wins” campaign donated one dollar to the Human Rights Campaign for every bottle sold.