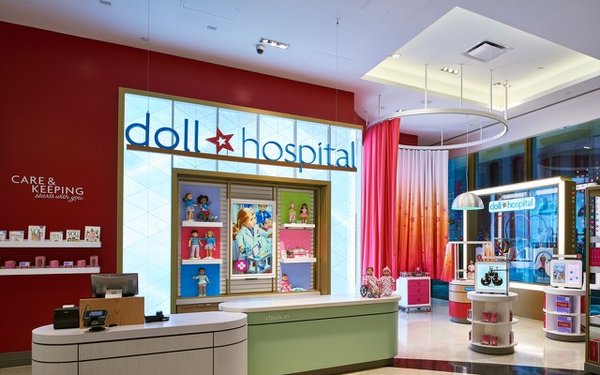 It’s tapped Grammy Award-winning artist Ciara for the holiday window reveal in New York, which will include the unveiling of the $5,000 Holiday Collector doll, embellished with more than 5,000 Swarovski crystals.

Other new “retailtainment” offerings include a fully immersive blast into the 1970s, and a redone salon, offering ear piercing and mini-manicures for girls and their dolls. And at all 17 of its stores, it’s teeing up events like gingerbread house and cookie decorating, holiday teas and salon specials.

The Doll Hospital, offered in both Chicago and New York locations, includes the basics -- pulse, temperature and a reflex check -- as well as interactive stations for eye exams, X-rays and even a dental checkup.

Julie’s World, only in the New York store, introduces kids to the 1970s, with a rotary phone, beaded curtains and an egg chair. There’s even a full-size VW Beetle for selfies.

American Girl, based in Middleton, Wisconsin, has been a painfully weak spot for Mattel, even as it engineers an impressive Barbie comeback.

While it’s too soon to report on sales, Horizon Media’s Why Group commissioned some research that suggests parents may well warm up to the idea, despite skepticism.

While 35% of the people it polled say they think the concept is just a marketing ploy from Mattel, 25% are positive about the idea of gender-neutral toys and 21% say brands have a responsibility to offer inclusive products.