Disney Bigfoots It Into The Streaming Wars This Week 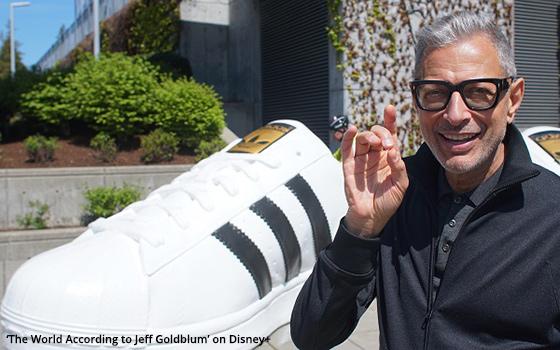 A giant shoe is as good a metaphor as any to usher in the launch of Disney+ this week as the entertainment colossus enters the streaming wars and appears to be positioned to stomp all over the competition.

The really big shoe in the photo above is seen outside the Portland, Oregon, headquarters of Adidas. And the man standing next to the shoe -- actually a giant sneaker -- is Jeff Goldblum, host and executive producer (along with Jane Root) of “The World According to Jeff Goldblum.”

This is one of the shows in the launch lineup for Disney+, which goes live on Tuesday (Nov. 12). This Jeff Goldblum show comes to Disney+ from the National Geographic arm of The Walt Disney Company, which took over NatGeo when it absorbed most of the assets that once belonged to Fox Television.

National Geographic is a renowned international brand, but in the Disney universe, it is one of many such properties. As such, it was possible to forget that Disney now owns NatGeo too.

Goldblum is posing next to a giant sneaker because the first episode of his half-hour show is all about sneakers, and how they evolved from inexpensive canvas “play shoes” for kids into a multibillion-dollar collectors' industry.

The show is great, and Goldblum is an eccentric, personable tour guide into the world of sneakers and sneaker collectors. Evidently, this is the approach he will take in the other episodes that will be up on Disney+ on Tuesday. Episode 2: Ice cream.

The fact is, reviewing the shows on Disney+ is futile in much the same way that resistance is futile when a vast host of Martians attacks the Earth. What's the point?

As mentioned recently in another TV Blog about the arrival of Disney+, the streaming service's publicists made most of their shows available for TV columnists to preview.

The one exception is the one called “The Mandalorian,” a new series that takes place in the “Star Wars” universe (not to be confused with John DeLorean and his idiosyncratic car; if there was such a show about him, it would be called “The Man DeLorean”).

Disney says it is not making “The Mandalorian” available in advance of its debut to prevent the widespread dissemination of spoilers. But here again, expending effort “reviewing” a show like this is pointless. Whatever its qualities, it will be a driver of Disney+ subscriptions and it will be widely watched.

Along the same lines, what TV critic would bother reviewing the made-for-Disney+ live-action version of “Lady and the Tramp,” which Disney has provided for preview? Finding fault with this movie would be like coming out against puppies -- literally.

The same goes for everything else that will be on offer on Disney+ -- from new original series to all of the properties they own (and most people have loved for nearly 100 years).

If anything about Disney+ emerges as grist for critical treatment, it may be in the service's design and ease of use (i.e., user-friendliness). And these characteristics of the service will not be known until it is up and running Tuesday.

However, given everything else we know about Disney, does anyone really expect its new streaming service to be anything other than the user-friendliest place on Earth?