Massive Phone Support Can't Save Spicer As He Departs 'DWTS' 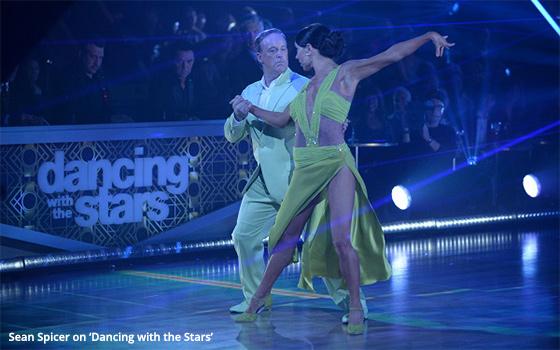 The saga of Sean Spicer on “Dancing With the Stars” finally ended Monday night as he was voted off the show following weeks of performances that should have earned him his ouster a number of weeks earlier.

But despite his obvious weaknesses as a ballroom dancer (which he fully admitted to), supporters phoned in their votes in his favor in such multitudes that he survived episode after episode in which he scored among the lowest judges’ scores received by any contestant on the show this season.

Indeed, the judges themselves -- Carrie Ann Inaba, Len Goodman, and Bruno Tonioli -- were openly frustrated at the conclusion of multiple episodes when Spicer was once again surviving the show after one atrocious performance after another.

However, the phone votes outweighed the judges' verdicts and Spicer, one-time press secretary for President Trump, survived right up until Monday night. On that evening, he was finally positioned in the show’s “bottom two,” which meant he could be booted by a vote of the show’s three judges. And that is what happened.

Spicer lasted nine weeks out of the 11 weeks slated for this season of “DWTS,” which concludes with a finale on Nov. 25. Of the 12 original contestants this season, Spicer outlasted six of them.

His inclusion on this season's list of (so-called) celebrity contestants, announced in August on “Good Morning America,” raised some hackles because of his association with President Trump.

Indeed, in his tenure in the Trump White House, Spicer became the most widely lampooned presidential press secretary in the history of that office. Among other places, he was pilloried in the comedy bit called “Drunk Sean Spicer” on “Jimmy Kimmel Live,” and on “Saturday Night Live,” where he was savagely portrayed by Melissa McCarthy.

As happens all the time now in our rush-to-judgement culture, naysayers -- many of whom probably never watched “Dancing With the Stars” in their entire lives -- were quick to condemn Spicer's inclusion in the new season's cast when it was announced last summer.

Even Tom Bergeron, co-host of “DWTS” with Erin Andrews, contributed to the anti-Spicer tweet storm by voicing his own displeasure at the booking of Spicer. Bergeron said he feared “DWTS” would suddenly become “political” -- and politically polarized, at that -- if Spicer was on the show.

No expressions of protest were ever glimpsed in the nine episodes that Spicer danced on “DWTS,” either inside the studio or outside of it. And Spicer himself never brought up Trump or any other political topic, although Trump himself tweeted his support of his former press secretary almost every week.

The President's tweets may have encouraged his supporters to throw their support behind Spicer too. In all probability, their phone-in votes played a role (and possibly the only role) in Spicer's longevity on the show.

In this way, the show may have become “politicized,” but in the final analysis, it didn't really matter. Sean Spicer managed to stay on “Dancing With the Stars” for nine weeks, and the world did not end.

entertainment, politics, tv
1 comment about "Massive Phone Support Can't Save Spicer As He Departs 'DWTS'".
Check to receive email when comments are posted.
Next story loading