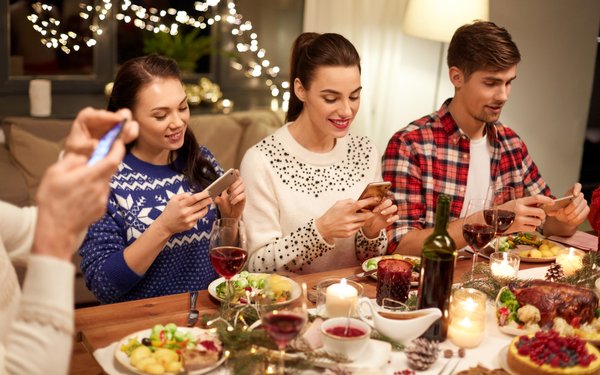 Connected gadgetry is expected to be prominent at the dinner table during the holidays.

Three out of 10 adults expect to use their smartphone or tablet at the dinner table at Christmas, according to a new survey.

For Thanksgiving, 27% of adults will be bringing their gadgets to join Thanksgiving meals, according to the survey of 1200 U.S. adults conducted by SellCell.

Family meals at restaurants are worse, with 61% of adults saying they stare at phone screens when dining out with family.

The use of electronic devices during mealtime has become the norm for 25% of families, according to the survey.

The most frequently used apps at the table are Facebook and Twitter and 42% watch videos during mealtimes.

More than a third (37%) of consumers keep their phones handy when eating to keep in touch with friends and relatives while 28% say they are completing the last bits of work projects to meet deadlines.