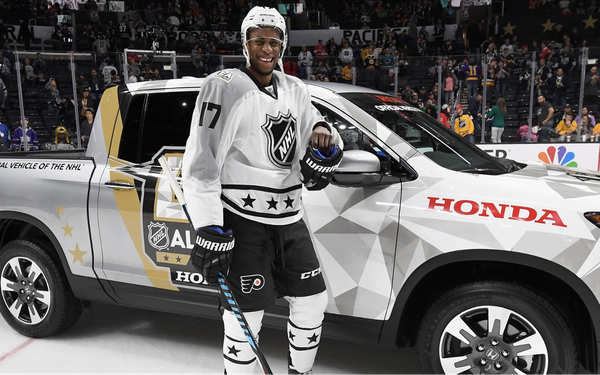 Honda will continue as the official automotive partner of the National Hockey League in the United States and Canada through the 2021-22 season.

The deal between the NHL and Honda began in the U.S. at the start of the 2007-08 season, with the relationship expanding to include Canada during the 2014-15 season.

Honda customers index very high with the NHL fan base, and the automaker has made an effort to align its light-truck lineup with the partnership, says Meliza Humphrey, manager of national advertising for Honda.

“The NHL has been an ideal relationship for the Honda brand for the past decade, with our light truck models experiencing record growth while the NHL has grown its fan base and added new franchises,” Humphrey tells Marketing Daily.

Honda will continue its presence at NHL tentpole events throughout each season, including title sponsorship of Honda NHL All-Star Weekend and as one of the League’s in-ice presenting partners of the NHL Winter Classic, NHL Stadium Series and NHL Heritage Classic.

During the Stanley Cup playoffs, Honda will be the only automotive partner, with signage featured on sideboards at all hockey arenas. Honda will feature the CR-V Hybrid in program ads at the events and running CR-V Hybrid creative on the NHL.com properties and on broadcast.

Honda’s partnership with the NHL is handled largely in-house, but the creative is being done by RPA.

At this season’s All-Star Game, Honda will leverage its partnership with IndyCar with a custom-wrapped IndyCar.

Throughout the regular season and Stanley CupPlayoffs, Honda will have camera-visible dasherboard presence during all nationally broadcast games in the U.S. and continue its commitment to the League’s national broadcast partners, NBC Sports in the U.S. and Sportsnet in Canada. Honda will also run media across the NHL’s digital and social platforms.